You Don’t Need A Degree to Teach Children Math

Our family has been on this “How to teach math?” kick now for almost 20 years. I’ve been working with my youngest, now 5, since he was about 18 months. By now ya’ll now that finding and learning to use base ten blocks rocked our world. But there has been one consistent complaint I’ve heard. “How do I implement this stuff?” If you have any math under your belt at all you can instantly see the genius of base ten blocks. But the issue is, “What do I do with this? How do I make it work?”

My goal is to make this as easy as possible for parents to implement. Not just easy, darn it, fun. Several years ago I created some activity mats for my then 2-year-old. We redid these for base ten blocks and added some activity cards for parents and a short guide on how to use them. My friend Amanda pointed out that some of the patterning suggestions are more for 1st grade and I agree with her. We’ve marked this as pre-k and k. But it can be used with children as young as 2 and some of the activities can be expanded and used for children as old as 8 or 9. As Crewton Ramone suggested, ASK: Do you want an easy one or a hard one? If they say easy, you know they still need work. If they say hard you know it is time to move on.

Included on the mats is space to work on writing numbers and number words. Quantity is depicted in multiple ways: a dot matrix on the numbers, fruit in the tree, birds, a ten frame and base ten blocks. All the mats are the same, it is the quantity that changes. This reinforces the idea of quantity for the child as they learn what the number 7 means.

[callout]Simple addition and subtraction inside the number 10 is easily accomplished with visual, tactile and auditory reinforcement.[/callout]

There are 11 activity cards that accompany the mats. The activities range from the most basic – identifying the blocks to more complex activities like pattern making, experimenting with the equal sign, and adding and subtracting. Some of the activity cards have multiple variations to grow with the child as the child’s understanding grows. Some activities are deceptively simple, but they lay the groundwork necessary for later math work. These activities can and should be repeated often. It is best to move slower giving a child deep understanding rather than move quickly through the activities. If the addition/subtraction activities are extended to numbers inside 20, these cards and mats will take a child through the first year of Ray’s arithmetic. Actually, it includes more than what is included in the first year of Ray’s. You should still pick up Ray’s just for the story problems/problem-solving portion.

For all of our EL fans, we have included 9 language packs for the mats. So each mat comes in 2 sizes for our US and non-US friends. It also comes in three different types: Mortensen/Math-U-See, Cuisenaire, and EZ Math. They also come in 10 different languages including English and one blank. And each language also has 2 versions, one with a blank ten frame and one with a filled ten frame. We printed blank on one side and filled on the other.  You’ll also find a set of flash cards for each language that has all numbers for each language on it, which you can use with the blank activity mat. 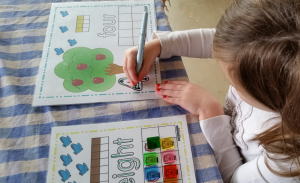 The blank ten frame allows for rearranging the quantity into
different patterns. And it reinforces the idea that it doesn’t matter how something is counted the number is the same. You can count six objects by putting them in a line, in a circle, separating them into 4 and 2 or 3 and 3 and now matter how you do it, there are still six objects.

We colored coded the activity cards to correspond with a particular age group. These activity cards are red and we have called then pre-k/k cards. But what we really mean by that is beginner cards. The mats and many activities can and should be used with a much younger age group and as I mentioned above, the degree of difficulty can be increased to make the activity much harder. 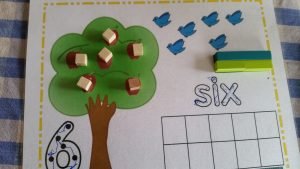 On the mat to the left you can see we have a six Cuisenaire Rod. Under it we have two of the 3 rods. On the tree we have six unit blocks. One of our favorite activites is “Let Me Count the Ways” or “Making Same”. The goal is to find as many combinations of rods that make same with another rod. In our current example we have 6=3+3=1+1+1+1+1+1. How many more patterns can you find? We are at 42 combinations for 6 so far. It would be helpful if we did these systematically, but it takes all the joy out of it for a 5-year-old. Playing this game on the mat helps reduce the degree of difficulty and assures a the child will have 6 most of the time. If not, the mat allows for self-correction.

In This Bundle You Get:

We really do want to make this as easy as possible for you the way it works for you. Our goal was to reduce the time you spend modifying the work so that you have more time to play and learn. Click the link below to grab this bundle and all the languages for just $7.97.

When we first started exhausting the relationships in the blocks we stuck to some fairly basic concepts and did not bother with adding numbers. That came much later. Since we are experimenting, we are doing this based on how my son responds to the material not based on a curriculum somewhere. I keep saying that the math is all one thing. That ...