0 comments
How to Teach     Uncategorized

If there is one complaint about base ten blocks it is that they are hard to implement. Even though Ben from Crewton Ramone’s House of Math has placed over 700 videos on the internet, people still complain. Anna Tarnowski from Anna’s Math Page has written an excellent “How to Get Started” tutorial that you can find in my FB Group files section and yet about once a week someone will still post that they don’t know what to do. I have this great handy dandy Quick Start Guide on the right here. And even after reading it someone will say, “Hey, how do I get started with a _____?” You fill in the blank. Given that I hear this all the time, I have come to believe that base ten blocks are really hard to implement. The question is WHY? People even find Miquon Math hard. Hmmm. Something this going on. Clearly.

Wouldn’t it be easier to just use a regular curriculum then? 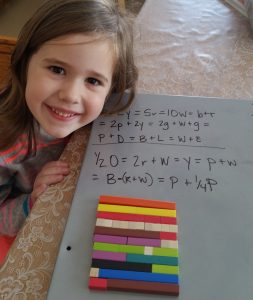 That is a happy math face.

I suppose that depends on your goals. If you desire is have your child pass a standardized test and just move along to the good stuff found in other subjects, then you can. I even suggest that you skip formal teaching of math till age 9 or so and just play math games in the meantime. I have seen some fairly compelling evidence that it doesn’t actually take that long to teach all of the elementary math topics. So why torture a child every school day for 4 years? Just play games and start formal math education in 5th or 6th grade. Kids who know about money will learn a lot of math on their own.

Why You Should Use Base Ten Blocks Anyway

But let’s say you do want your child to love math. And let’s say you want math to be a deep exploration of the beauty of numbers. Then you need base ten blocks. And you start at the beginning with your very own math notebook. And you learn right alongside your children. We will help you. My first suggestion: Get rid of the numbers. Turn your Mortco blocks sideways and start using letters that stand for colors. Small children don’t have to do calculations to do real math and your 6th grader will develop an intuitive understanding of algebra. And you will start to “see” the relationships. Don’t worry, it gets easier as time goes on. It is like a muscle that needs exercise. The only way to make base ten blocks work is to play with the blocks.

When I first started my husband would find me, late at night, sitting at the table playing blocks when I should have been in bed. I built walls and towers. I factored a lot of polynomials. And the math came alive.

Today is Math Monday. Sign-up is easy. Enter your email to the right and get my free ebook and you will automatically be added to the Math Monday club. You know that club with all the cool kidz. Yeah, that's us. Except it's not. We were never really the cool kids. And we weren't even part of the geek squad. There, it is finally out. I admitted it. ...