Training a Mathematical Mind Even If You Hated Math Series – Addition

The only way to flex your “relationship seeing” muscle is to pull out some blocks and look for relationships. In the following image, we have an orange block (o). We will be using that block as our reference. We are describing the other 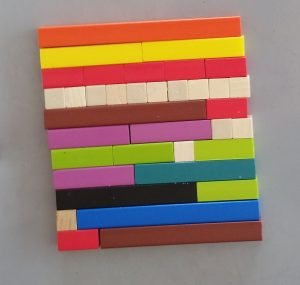 blocks as they are related to the o block.  There are other relationships to be seen here, but we are  not concerning ourselves with those today. To make this easier, we will stick with just addition. Immediately we notice that there are a lot of possible combinations of blocks that will “make same” with the orange block. This is called combinatorics and is part of set theory.

We can play around with (analyze) the image and ask questions like:

If we have several children at the table, we can ask each child to make as many combinations as they can find in a set amount of time. We then ask:

Now let’s say what you see starting at the top and working our way down. I am going to use letters that represent the colors. They are as follows: 0range = o, blue = b, brown = n, black = k, dark green = d, yellow = y, purple = p, light green = l, red = r and white = w.   I am writing all of it as an exercise in equivalent addition. Each line represents one equivalent. If I were doing this with my son he would say each line and I would write it down for him exactly like I have entered it below. Right now, for the + sign he will say the word “and”. He uses the phrase “is the same as” for the equal sign. We will transition out of that when he starts writing on his own.

What did we learn from this exercise?

___TVE_SHORTCODE_RAW__<p>I used to hate subtraction. In elementary school, it was the worst thing ever and I didn't mind math, at least not at that age. There is no reason that subtraction has to be a problem for any child. There are a lot of strategies your kids can use besides the standard borrow/carry algorithm we teach in school. ...