This is the 4th post in my series on Training a Math Mind. We are looking to uncover the relationships that are the most visually obvious in the blocks so that you can help your children to see them as well. Again, I chose to use Cuisenaire Rods for this series because the units are delineated on other base ten blocks. We actually use the Cuisenaire Rods for this kind of work in our homeschool. When we are looking to understand the mathematical relationships the numbers get in the way. Which is funny because we assume that numbers = math. Today I am covering division and fractions and we will also be using addition, subtraction, and multiplication to describe how blocks are related to the orange block, but also how some blocks are related to other blocks

We wrote this entire image before as multiplication equivalencies. o = 2y = 5r = 10w.  If we look at the image we can say that 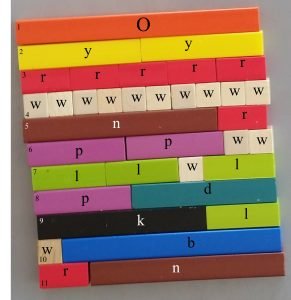 This larger image provides us with enough math work for a 1st grader for a year. It would get boring, but it is unlikely that even an 8-year- old could exhaust the relationships found in that image. Our goal is not to bore children with math but to spark their imaginations. If your child doesn’t think of this work as a fun math game, we need to rethink our approach or skip it and find something that your child does enjoy doing. Base ten blocks are a geometric model of math. These images can represent many ideas, as we have seen. The question becomes does the child understand the model? And does it make sense to the child? If not, we should back up or try a different model.

For an excellent series on considering relationships in math and training your mathematical intuition, I suggest a series of posts by Kalid over at Better Explained.

Math Notebook - How We Keep One

We use base ten blocks as the foundation of our math program. We don't use worksheets. I am not working page by page through a curriculum, which is fantastic for me. I love it. But when it comes time for record keeping this poses a problem. In the beginning of our base ten blocks journey, I decided to keep an interactive math notebook.  My first attempt ...