If you get nothing from Gattegno Mathematics Textbook 1, other than what I'm going to show you in this post, your st​udents understanding of mathematics and numbers will be dramatically increased. This post covers exercises 45 - 49 of chapter 4. If you don't have a copy of the book, you can get a free online copy here. We're going to be covering a lot of ground and all of it having to do with the one game every teacher should have in their toolbox - ﻿﻿﻿﻿The Substitution Game.

What Is The Substitution Game?

What the student is learning, beyond facts, is that there's nearly an infinite number of ways to write 1. Students are also learning the "secrets" to building complex mathematical statements. We are also removing the fear of complex math statements from the beginning. Students know how complex math is built because they have done it.

The other reason to play this game is that it is fun. Students get to be creative, that rarely happens in math class. All students, no matter their proficiency level, can play. All we are doing is restating a single number.

The last reason to play this game is that students take a great amount of pride in creating complex math. It gives them confidence that they can master the subject. Which they can.

The variations on this are endless. But lets look at what Gattegno is doing in exercises 45 - 49.

In this variation, Gattegno has the student take the dark green rod and substitute the green rod for 2 rods using the number names.  We assume that the white rod equals one. In this variation, we begin not with an equation but with a single number - 6. We substitute for 6 the addends/number bonds for 6: 6 = 4 + 2 = 3 + 3 = 5 + 1.  We then remove one addend from each bond, or one rod from each row. Can the student say which one is missing?

Instead of replacing one rod or a single number, we are replacing an entire expression.

This particular variant gets exciting for students with more experience. This is where they take everything they know about mathematics to come up with new ways to say something. Does the student have a handle on addition, subtraction, multiplication, and division, plus fractions? Then all of those operations are available to them when playing this variation.

This game can be played in kindergarten through high school and both at the same time. I started tutoring a student taking Algebra 1 recently. I introduced the substitution game the first meeting. Why? It is easier to understand complex equations when you've built them yourself. You get to know their "secrets".

Substitution Game and the Math Notebook 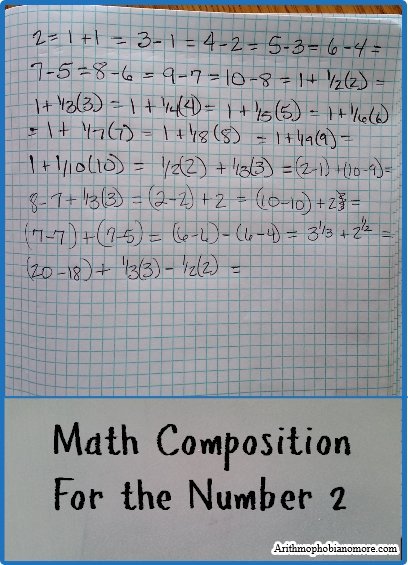 ​Why The Substitution Game is So ﻿﻿﻿Powerful

I do want P. to understand the math and the best way to do that seems to be following Gattegno's lead. P. builds math from the ground up and since he already makes sense of all kinds of things, I trust he can make sense of math too. The Substitution Game is just that: building math from the ground up. A child is constantly relating new information to old understanding and taking one area of math and relating to another area.

I did a training recently and all we did is play the substitution game. We started at 1 + 2 = 3 and we ended at a variation of finding the difference of 2 squares. One of the ladies said, "I learned more algebra in one hour than I did the entire time I was in algebra class." How did that happen?

The funny thing is I didn't teach at all. Really. I just made suggestions for substitutions. I said what happens if we replace all of one thing with another thing.

What happened? Parents who were terrified of math suddenly began to see how this all works. They easily saw the relationships between the different areas of math. One mom even said, "Oh my goodness, this is so easy, I can play with this now."

What hit me is that much of the math our students are learning in elementary and high school is just some variation of the substitution game. This game is worth more than a 1,000 worksheets. A child hasn't mastered math when she completes 1000 worksheets. You know what math a child has mastered when she can generate the math herself.

This blog post continues our work in Gattegno Textbook 1. We are on page 51, exercise 50 if you would like to follow along. For a free copy, click on the image of Mathematics Textbook 1. This post covers products, crosses and factoring numbers. We'll also be making a spot in our math notebooks for a Table Of Factors. Exercise 50 is the student's ...