The Silent Way – What I Learn When I Shut-Up

0 comments
How to Teach     Uncategorized

Caleb Gattegno is the reason most people know about Cuisenaire Rods. He is also the father of ‘The Silent Way’ of teaching.  The Silent Way stresses the learners’ autonomy and participation in the learning process and, as the name suggests, uses silence as a teaching method. The teacher is not pouring information into a student, rather the teacher facilitates and directs while helping the student develop their natural capacity for learning and capitalizes on the desire to learn with which all of us were born. The Silent Way is a method to help the student learn for himself, with little verbal interference from the teacher. I’m pretty much a convert – at least philosophically.

The Silent Way – Learning to Monitor The Teacher

I have been attempting to do some work with P.   (my 6-year-old son) that covers the next post in my blog series on Gattegno Mathematics Textbook 1. He has different ideas about what he wants to do with math. I’m fairly lenient with his exploration at math time as long as it is going somewhere and he’s not just knocking rods all over my dining room table.  Our scheduled work had to do with multiplication and fractions inside 5.

He got derailed when we tried to cut 5 in half. That can’t be done with the rods; it needs a white end cap. That led us to a conversation about odd and even, and he decided he wanted to find odd and even numbers using rods. We know odd and even but I let it go because we haven’t touched on the subject for months.

He placed all the rods out to find trains with two cars of a single color. Those rods that can be made with an equivalent two car train of a single color are even; those that need a white caboose are odd.

I said the first four patterns while I pointed to each train. Then I asked P. to read the following patterns in the same way. He did it. Then I asked, “What will be the equivalent train for the number i1?”

He said something like, “A blue and an orange.”

I thought he was joking so I said something like, “Oh come on…what comes next in the pattern?”

After we had reached the orange rod I asked, “What comes next: a pair or a pair and an extra white?”

“Oh, a pair and an extra white!” Ok, we are getting there I think.

“What color pair?” We are looking at the rods, and you can see that the orange rod contains a pair of yellow rods. So this should be easy for him.

“Blue?” Completely baffled, I decide to stop talking since it is clear that he doesn’t understand the pattern and he isn’t sure about this. So I decided to let him explore. I left to make a pot of coffee. Obviously, he understands odd and even, but we either have a problem with pattern recognition, or we have an auditory problem. P. has trouble with hearing a pattern and creating it. He also has difficulty with math compositions when the rods aren’t in front of him. So, maybe it was a combination of the two.

Back to the table I go and he still hasn’t figured out which rod fits the pattern. 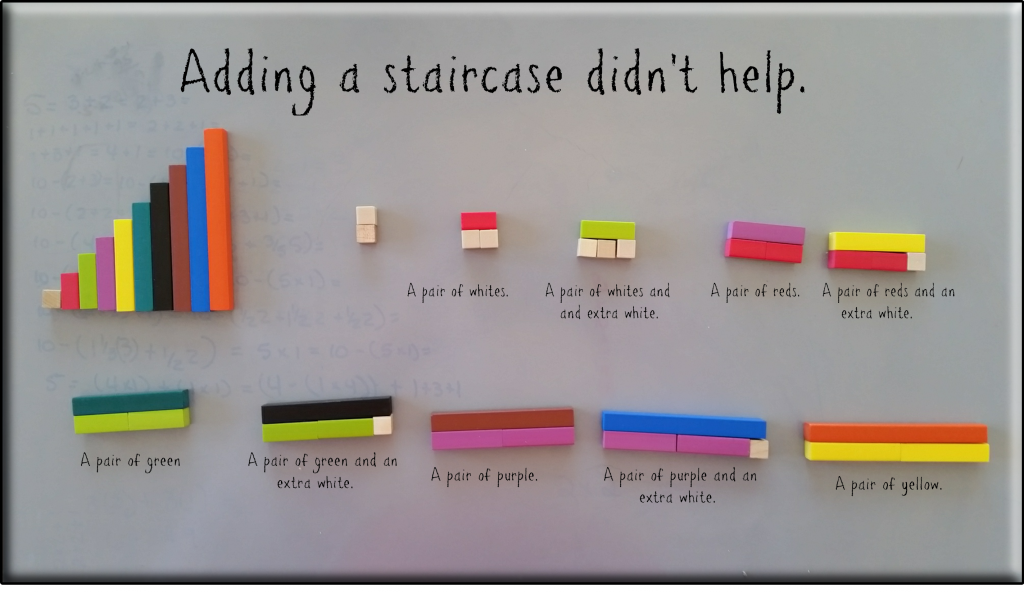 We are about 30 minutes into the exercise, and I noticed I was getting very frustrated. There were thoughts going through my head, “he is dragging this out on purpose, he is just being lazy, he knows what you want and is just being defiant, what it so hard about this, I have stuff to do.”  Dad walked in as I was getting up from the table.

The first thing P. says is, “Dad, we are having a rough go with math this morning.”

I was startled he said that so I asked, “Why do you think we are having a rough time?”

“You have irritation in your voice.”

The Silent Way – When I Actually Shut-Up

This is not how I want math time to go, and I certainly don’t want my child to feel the weight of my impatience over his math performance like a shadow. I didn’t realize I was irritated until I stopped talking. But it was true; I was annoyed that what should have taken 30 seconds had evolved into a 30-minute ordeal. I had things to do that were evidently more important that his education. My underwear was in a bunch over it, and P. knew it.

Mother took a deep breath. I had an idea. Why not try The Silent Way? Without saying a word, I lined all the trains up side by side in a staircase and then ignored the child in front of me while I talked to his father. 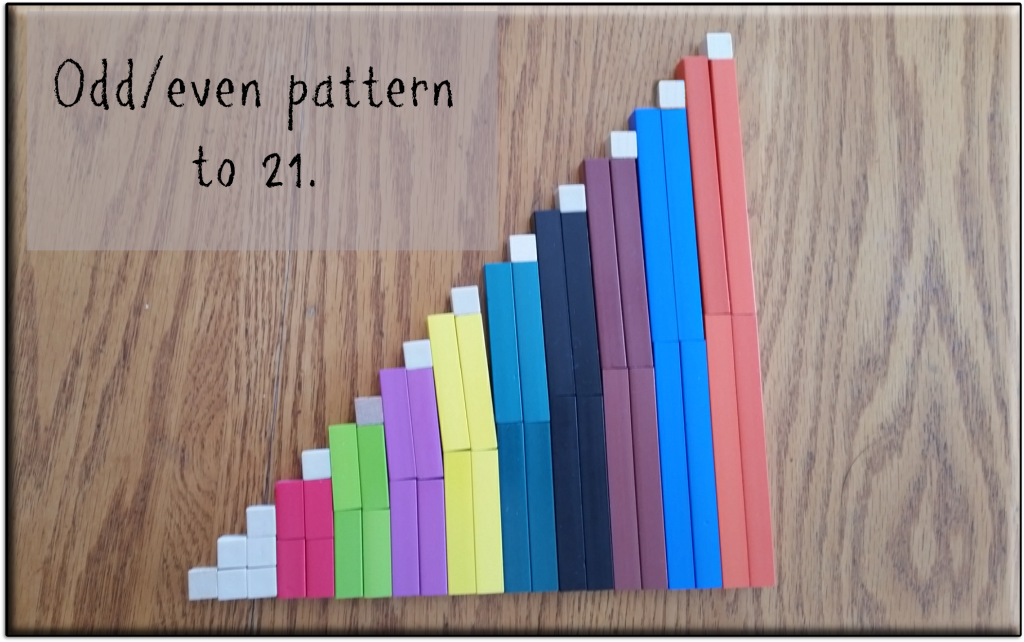 What I should have done differently:

Obviously, I don’t always have a good handle on The Silent Way of Teaching, but I am getting better about checking myself. Much of my time teaching is spent gauging my attitude and need for adjustment. Denise Gaskins, from Let’s Play Math, shared this video with some friends today. What I love about it is that it distils a lot of Gattegno’s teaching into two questions/ideas: notice and wonder. You find these two ideas all over Gattegno and Goutard. However, I haven’t seen anything this concise before. Anyone can keep this at the back of their mind. Did you run out of questions? Notice and wonder.

I keep telling people that the Gattegno books are a guide. Grab a notebook and learn along with your kids. You don't know where it will take you. We've been attempting to work through Gattegno's Textbook 1. We are supposed to be on chapter 4 working with multiplication and fractions while studying the number 5, instead, we've been deconstructing numbers. ...