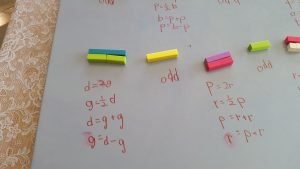 Learning to “see” the relationships abundant in the blocks.

When we first started exhausting the relationships in the blocks we stuck to some fairly basic concepts and did not bother with adding numbers. That came much later. Since we are experimenting, we are doing this based on how my son responds to the material not based on a curriculum somewhere.

I keep saying that the math is all one thing. That isn’t exactly true, but much of primary mathematics ( and much more) can be described with the geometric model of a rectangle. The math is simply describing parts of the rectangle to the whole, or the whole to the parts, or some parts to other parts. But we are talking about the same rectangle. We find that using letters to reference the colors makes describing those relationships much easier. Plus well, when you use the letters, you end up teaching algebra by default. It is truly much simpler to go letters to numbers than the other way around. There is very little computation involved with the letters.

Later we can add whatever numbers we want once we have the concepts down. Exploiting the relationships has and is developing our “relationship seeing muscle”. It is something we are doing slowly, much like training for a 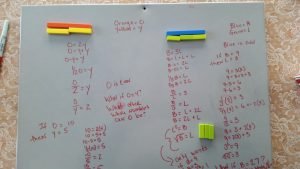 marathon. The following work looks pretty sophisticated for a 5-year-old, but we have been working with the blocks for well over a year and we’ve been intentionally “exhausting the relationships” for over 6 months. We have taken time off to look at each of the operations individually and then we bring our new understanding to examine the blocks as a whole. You can teach addition, subtraction, multiplication, division and fractions in one easy lesson, but it is best to build up to that if you are working with small children who have no experience. Teach one thing and teach it well.

What has happened to our math time over the last year is that the math itself has become a game for P. What used to be a pain is now a fun and delightful challenge. Which is a refreshing change from my oldest child, he will gleefully share with you his homeschool math horror stories five years later. One day he will forgive me, in the meantime I will just continue to tell him that I love his little brother more.

We started easy, as you can see the first image has only 3 blocks. There is a very limited number of relationships that can be described though we didn’t describe them all. The second picture has a few more relationships plus we added the square on the second image. We both decided that the square only works if blue=9. If blue is 12 or 3 then the green blocks do not make a square. As P continues to develop his understanding of fractions, it is becoming easier to use them when describing what we see. 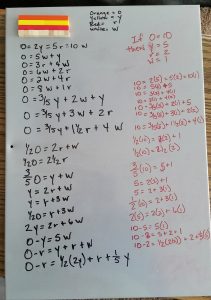 Things are getting a little more complex.

Once we plug in the numbers things slow down a great deal. Calculating is fairly slow going.  We have to not only prove that our algebra sentence is correct but that it will work with the numbers we have inserted the sentence. Are we sure that 2 1/2 twos are really 5? If we are not we have to take the blocks and check to make sure we are right.

We are moving in baby steps towards being able to write without the blocks in front of us, and to be able to insert other numbers beside the most obvious. What happens if O=20, or O= 100?  What happens if O=12 or 32 or 6? Do the sentences we wrote still work? And if so, why? And what kinds of problems might occur with the blocks if O=6? Y will equal 3 but what will r equal? Hmm? Things to think about.

Make It A Math Monday

Homeschooling is hard, right? Almost everyone hates math, except the geeky kids. People read poetry because it is beautiful. We do nature studies because they are beautiful. We like great literature because there is something universally true about it and it speaks to us and the human condition.And then there is math. Math pain. Math tears. Math fear. ...