Welcome to the 122nd Playful Math Education Blog Carnival started by Denise Gaskins. This is the second time I've hosted this carnival. Both times, I've learned a lot and enjoyed both the submissions to this carnival as well as curating content.

In an effort to stick with tradition, we'll explore the number 122.  I wanted to go crazy and say all kinds of cool things about this number, but it's not that exciting. It's the product of two primes: 2 and 61. One-hundred and twenty-two seconds is two minutes and two seconds. You can count that high, if you are not giggling, in about a minute or so. If you are giggling it takes much longer, sometimes 5 or 10 minutes, to count that high. Our house is filled with gigglers.

We've long believed that the Roman emperor Hadrian had a defensive wall built that stretched 70 miles across Northern England in the year 122 AD. But there is some recent evidence that the wall was being built before that. So I'm not sure we can use that as a claim to fame for our number 122.

Which means all we have on this number is the two primes and a lot of giggling. Here's to 122. 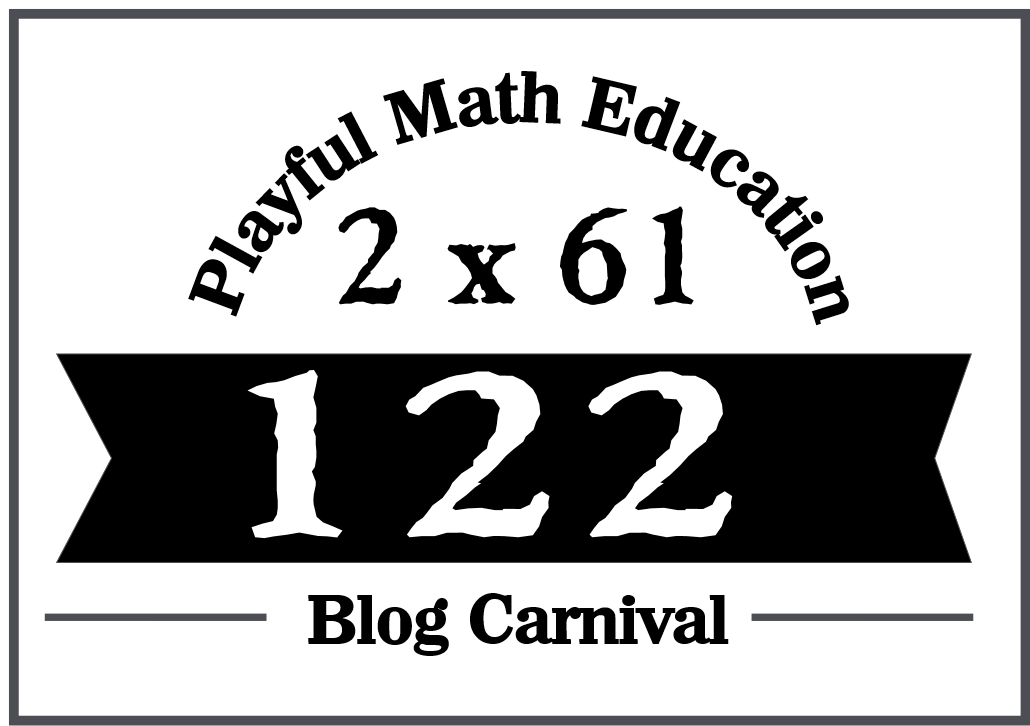 Last month's carnival was hosted by Joseph Nebus over at nebusresearch.wordpress.com. I enjoyed perusing his site and his sense of humor. I'm not a comic reader and wouldn't have associated them with thinking about math. But, alas, I was wrong indeed.

I volunteered his very playful post called Reading the Comics, October 24, 2018: Frazz Really Wants to Be My Friend Edition for this blog carnival.

I had two favorite comics on the page, the first one was about the largest possible number, and the other was about the number 1, which reminded me of this video by Vi Hart on Logarithms.

Curiosities for The Curious

After a hour or so on Joseph's site, I headed straight for Ben Orlin's site Math With Bad Drawings - he never disappoints. As it turns out, I've seen math comics before - Ben does comics...but he's right. The drawings really are bad. Ben's got a new book out. You can get it here - I don't even get bonus points for mentioning this book. What's the real difference between a million and a billion? He illustrates the difference for us in his post Errors No More Egregious Than Confusing "Million" and "Billion" if you are curious.

It's the Playful Math Education Carnival - thus far we've explored a lot of comics. But there are other curiosities to behold. Over at chalkdust - the magazine for the mathematically curious, Colin Beveridge is playing with Truchet tiles.  These tiles are addictive. It's not just me. You can find a few math educators playing around with the tiles in this thread on twitter. Don't skip the twitter conversation - do that first and then make some Truchet tiles of your own by printing out the basic tile template here.

Over at Babble Dabble Do, Ana is Playing Around with Infinity Tiles, you can color them any color you like, or experiment with just black and white as you would with the Truchet tiles. Infinity Tiles are an Islamic art form. If you want to delve into the curiosities of Infinity Tiles, there is a great historical article on them over at Islamic Art and Architecture which also delves into the mathematics behind Infinity Tiles which I found fascinating. NCETM put out an excellent 49 page book for teachers on Islamic Art and Tilings which you can download free here.

Speaking of Infinity, Mike Lawler is taking his kids through Richard Evan's Schwartz's book Gallery of the Infinite on Family Math Night.

Simon Gregg, who hooked me up with the Truchet tiles above, had a couple of his old posts on the curiosities of counting and partitioning revived on twitter and for good reason - they are really good posts. Let's say you're not a particularly well educated math person (that's me) but you find yourself teaching math, Simon is right there with you letting his curiosity drive him to discover and explain things in a way that even I get it. Besides, there is something oddly satisfying about partitioning Cuisenaire Rods.

Elias Wirth is Taking a Walk with Euler and creating the most mathematically pleasing walk about town. If our town has 7 bridges, can we create a path where we would cross all the bridges only one time? "The problem quickly piqued his [Euler's] interest. Why was it impossible for him to take a route crossing all the bridges? Was this true for any number of bridges? Did the answer depend on the layout of the bridges?" Elais follows Euler's footsteps with his readers to solve this curiosity and create a Euler Walk.

Playful Math Projects for The Young and Young at Heart

Denise Gaskins makes a Counting Rope. We've made these before. Why would you make one? Visually laying out numbers by 5 creates a pattern that makes counting visually obvious. Counting ropes can also be used to create patterns other than 5 and ties into Simon Gregg's posts on counting and partitioning above.

Denise also posted a brilliant resource on Negative Numbers for Young Students. I love the visual imagery of above ground and below ground to orient a student's thinking or above the water/below the water if you are going to use ocean option she suggests.

She makes some great suggestions about how to tell stories based on the image of the tree and the ocean that make the counting of negative numbers visually obvious. I much prefer that student's write their own stories than that the stories are written for them. They develop the satisfaction of creating real math problems and it requires a significant amount of thinking to generate decent math stories in the first place.

Over at the Math Hombre site, he's playing around with Golden Triangles with 5th graders, but this project can be made easier for younger student's as well. It's a project the whole family can do and falls into the category of math art as Math Hombre dissects a star into triangles and then, puts the triangles back together. I teach a bunch of 4-6th graders and we noticed that rectangles always tessellate. John has several good posts on tessellations you can find here.

James Welham is working on volume and surface area and posted this super fun video on Pull Up Nets. Am I the only one compelled to watch this over and over again?

You can download the original article on pull up nets and how to make them by Liz Meenan at ATM here.

This wraps up the 122nd Playful Mathematics Education Blog Carnival. I hope you found at least one thing to stimulate your curiosity. If you would like to participate in the next blog carnival you can send your submission to Denise Gaskins at her blog. She is hosting the next Playful Mathematics Education Blog. If you would like to host the carnival on your blog, let her know.

In this blog post I want to discuss both the Associative and Commutative Properties of Addition and Multiplication and how student's learn to intentionally use these properties in Gattegno's Textbook 2. What we mean by the Associative Property is that it doesn't matter how we group addends in addition or factors in multiplication. Back in chapter ...