This post covers making comparisons as found in activities 5-9, of chapter two in Gattegno’s Mathematics Textbook 1. You can find all the posts in this series by clicking on Gattegno Textbook 1 in the categories box on the left. If you are new to this series or got lost on the web and ended up here, we are going through Caleb Gattegno’s math textbooks for use with Cuisenaire Rods. Gattegno is unique in his introduction of algebra before arithmetic to 5 – 7-year-old children. This blog series is to help teachers/parents use the books more effectively.

Gattengo has four activities under the heading of smaller/bigger, also included is the concept of equality or sameness.  He asks that the students compare the following: 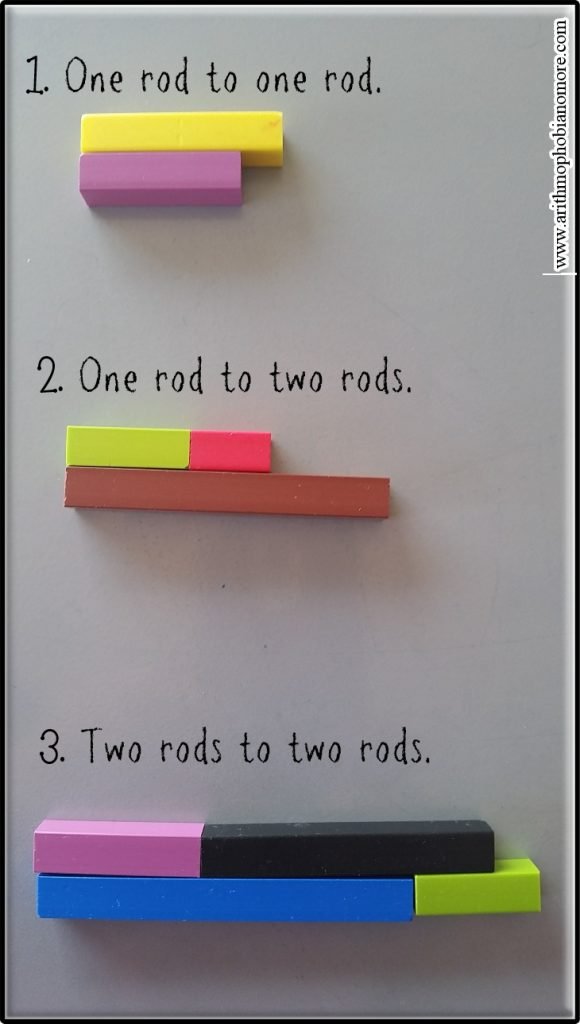 How We Did This

Sometimes I would dump blocks on the table. Then I asked my son to close his eyes and pick a rod from the pile. The chosen block is the comparison rod. Now it is time to sort the blocks. Blocks of the same length went into the center pile. Larger blocks to the right, and smaller rods to the left. My son always uses his rod for measuring.

We also did all of the above exercises as part of one math lesson. I would make a train of 2 rods and ask my son to build one train that is smaller, one that is bigger, and one that is the same size. I might ask him to build a train of 3 rods that is smaller than a red and a green rod or a train of two rods equal to a black rod. You can take turns making trains and giving directions. Each direction adds a new constraint to the exercises: Make a train that is smaller than an orange and a green rod; it must contain a blue rod. Make a train larger than an orange and green rod, but you can’t use yellow. 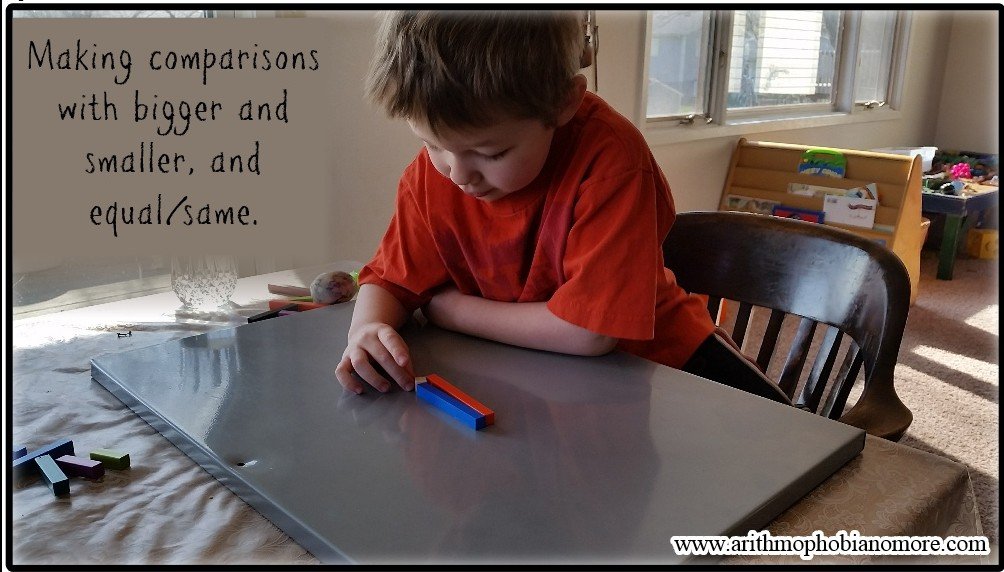 You could assume that if the young student chooses the brown rod, which is 8 units long in both Mortensen and Cuisenaire, that she would immediately pick out the brown ones and place them in the center pile. I have never had a young student do this. The student will measure the brown against the brown to make sure. This is true even if we have done other exercises measuring the rods. Even if my student told me yesterday that all the brown rods are the same length, she would still measure today. And she will likely measure more than one brown rod. Some students will measure every brown rod. Similarly, the student will usually have to measure several yellow rods, and purple rods against the brown to be sure they are smaller as well as several blue to confirm that those are longer.

At this stage, Gattegno is using the blocks in a way that lets the student check their work. If the child can see two blocks in front of her, she will then take two additional blocks and place them side by side with the first two. She can see with her eyes which train is larger or smaller. The next step for us, though Gattegno doesn’t mention it, is to place a rod or two on the table and ask the student the following, “If I had a red and dark green would those be larger or smaller than the blue rod?” “What about a yellow and a purple?” If the student provides an answer, you would then ask him to check using blocks. This activity helps the students visualize quantity and makes mental math work easier down the road.

Once the student can easily find rods and combinations of rods that are the same as another group of rods, we will ask the child to “find the missing rods.” We will follow the progression as we did above. 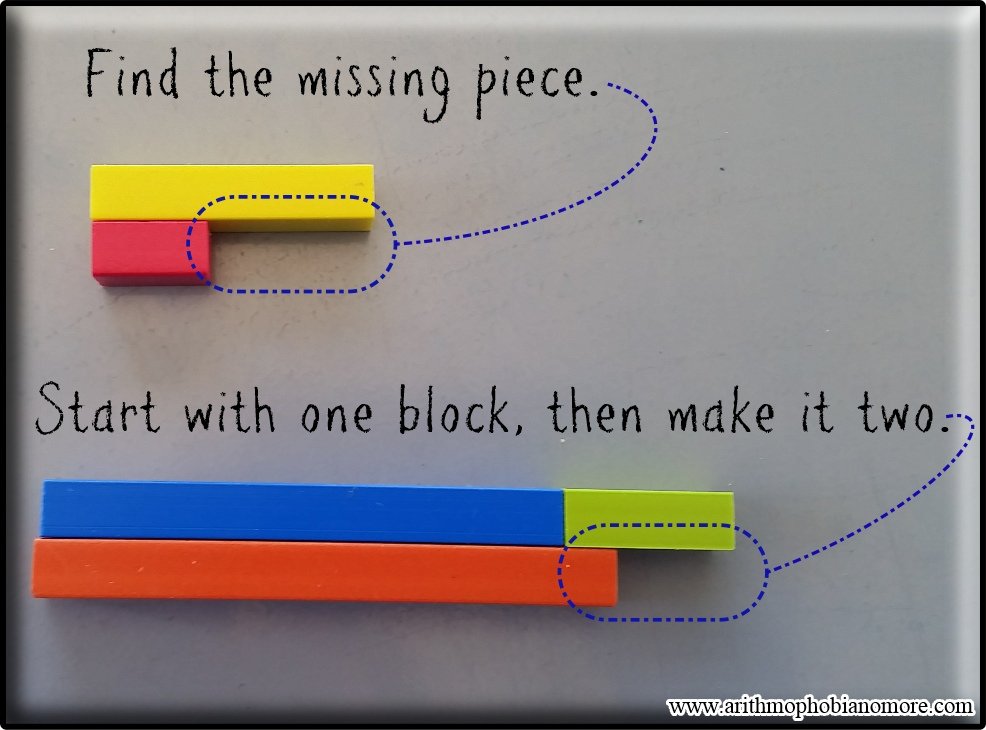 3. We add a little twist. We take a set of rods from the exercise above and mix them up. We ask the student which rods go with which to make a two trains the same size. In other words, the student needs to recreate the trains from acquired knowledge, memory, or by discovery. You may clarify, but you may not assist or ask questions. Just let the student figure it out. What happens if you put any two rods end to end? 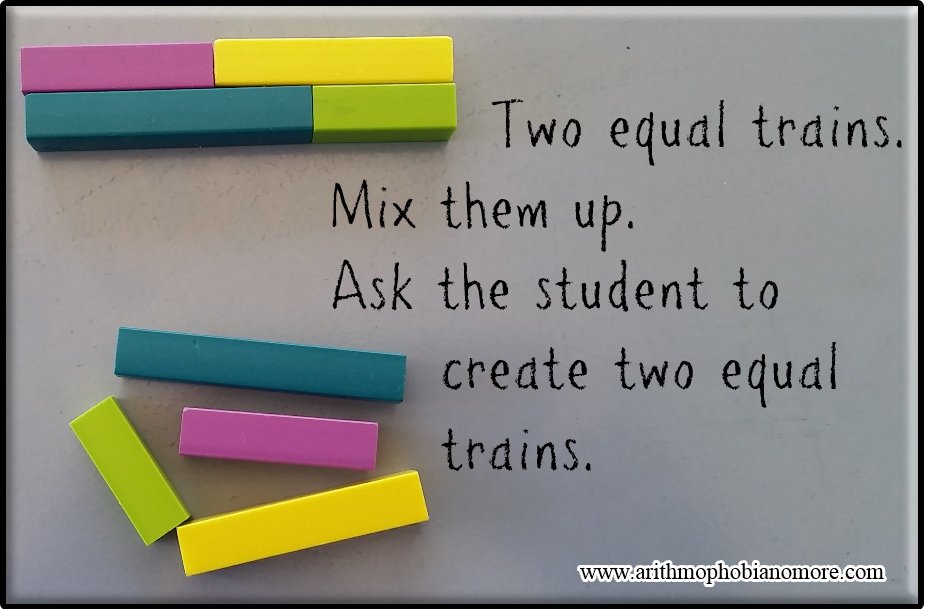 Comparison War – A Variation on the Theme

What are We Doing Here?

We've come to staircases, which are covered in exercises 10-12 of chapter 2 in Gattegno's Mathematics Textbook 1. When I used to think of Cuisenaire Rods, this is what came to mind. If you do a google search for Cuisenaire images, you will find lots and lots of staircases. So what's the deal with the staircase? Something I wish Gattegno had done ...