I'm posting my way though Gattegno's ﻿﻿﻿Mathematics Textbook 1, we're in chapter 4 studying the number 5. Students are coming into contact with addition, subtraction, multiplication, and fractions as operators. Our lessons often get derailed. If you've read my blog at all, you know I think this is a good thing. Obviously, today's lesson got derailed, so you won't find this in the Gattegno textbook. But we are learning fractions and that's what's important.

We were supposed to move onto the study of 1/4 today. But when we reviewed 1/3, P. had a few glitches in his understanding. He was giving correct answers, but I could tell that while 1/3 of the light green rod was clear, his awareness of fractions and number names still isn't solid. What I decided to do is ask P. to show 1/3 of various rod lengths. We used the Cuisenaire Rod color names the first time around. This was no trouble for him at all.

Next, I asked P. to say the names of the rod ​using number names. This proved to be much more difficult. He actually said, "Can we be done? This is getting harder by the minute?" I smiled and replied that he was more than capable of meeting the challenge, he just needed to slow down and think. I was correct, and he was surprised. 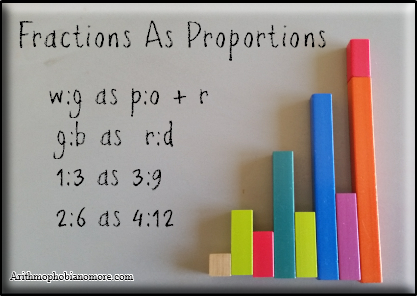 This became P's math composition for today. When we started the lessons he was still struggling with fractions when he used with number names for the rods. By the end of the lesson, he was all, "Oh come on Mom, make it harder!" That is another way I know that he has this down. ​ 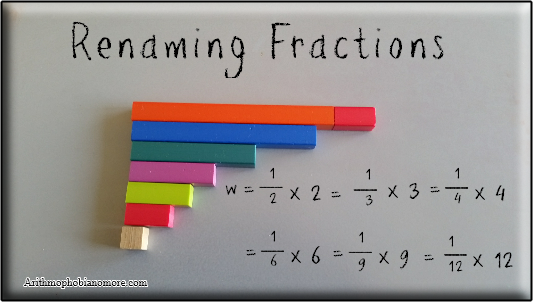 P. came away much more confident using number names and fractions. We spent almost a year and a half on chapter 3 of Gattegno's Textbook 1. The transition to numbers names from letter names has been bumpy. As far as I can tell, this is a memory and language issue not a comprehension issue.

​As he is learning fractions, he is gathering all kinds of awareness in addition to what is required for fractions.  One doesn't have to worry so much about cross-teaching. It just shows up all by itself: a little change here, a renaming there, and a bit of rearranging the rods and all kinds of relationships present themselves to you.

In that post, I gave a list of strategies I use for adapting the exercises in the textbook and making them more interesting for older students. I used three of those strategies in this post and added an additional one.

Gattegno was working with 1/3 inside 5, but I'm not under any obligation to keep the student at 5. It's not like if we go outside of 5 someone will ground me or send me to bed without supper. We're not ruled by the curriculum, and Gattegno wouldn't want you to be either. There is no reason just use 1/3 as the fraction. You can use any fractions, including odd ones like 5/12.

2. What Can Be Compared, Contrasted, and Constrained?

​Instead of just leaving it at 1/3 of three, we decided to look at 1/3 in multiple contexts and compare them. We did this by rearranging the rods into staircases. This helps us get a fuller picture of 1/3.

In the last image, we renamed. We do this a lot. The white rod is not the number one any more than a single cow in a field is one. Numbers aren't objects and we can call one anything. Renaming reinforces this idea. But it also develops flexible thinking when it comes to mathematics. There is not a singular image for one-third; and there is no magic that turns something into one-third. One third describes a relationship of one quantity to another. ​

4. Does This Remind You Of Anything You've Seen Before?​

I've just started asking P this question mostly because he has started to notice relationships in all kinds of places. He is coming to realize that characters in stories follow types. And the same types show up over and over again. ​Fractions and ratios look very similar and so do fractions and multiplication. I've started asking it in the hopes that he will start asking himself this question as a strategy for noticing what is in front of him. 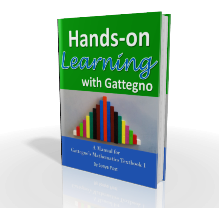 What if Math Were the Easiest and Most Fun Part of Your Day?

Get Hands-On Learning With Gattegno - My Gift To You

Learning Numbers 1-10 Review
Cuisenaire Rods – One Can Be Anything
What’s Up With The Rectangle? Polynomials
Division with Cuisnaire Rods
#Fractions , #proportion , #ratios
Read Next

What’s Up With The Rectangle?

A discussion arose in the Facebook group about "why the rectangle". Mortensen Math, Math-U-See and even Gattegno use the rectangle for teaching math concepts. Why? What is so special about the rectangle that it makes visualizing math so easy? The last question that was asked was, "When would I use this in real life?"Polynomials and factoring them ...