Complement means, “something that completes or makes whole.” If we have a brown rod and place a light green one side by side with it, which block complements the green one so that it is equivalent in length to the brown one?  If you are using Mortensen Math or Math-U-See, you will recognize the same concept in the “Ten’s Having a Party” game. Blue is having a party. Which rod does yellow need to take to get into the blue party? The yellow

If you’ve been following along, you will remember we did this same exercise when we compared trains and asked the student to “fill in the missing piece.” This time, however, we are using a term complement. We are just adding more information to what we’ve already done. And, we will gradually increase the “degree of difficulty”.

Gattegno and Degree of Difficulty

When my first child suffered through my math teaching, what he received was a giant serving spoon of information shoved into his face. Not only that, but each spoonful came rapid fire. The poor boy barely had time to breathe. And if he choked, I yelled. When he refused, I did what any rational, mature parent would do – I had a temper tantrum. I’ve asked forgiveness. This blog is my penance.

What do we do instead of shove information down our kid’s throats? Slow down. Don’t skip activities, and follow the pattern Gattegno sets up in the activities. We start with play and gradually increase the degree of difficulty. If a student starts to have problems, we back up to where the student has a sure footing. If she get’s bored, we move ahead.

Degree of difficulty is not a phrase that comes from Gattegno, but rather from Mortensen Math. However, the concept is rampant throughout Gattegno’s work; this is how he presents the information he wants the student to learn.   Gattegno is so good at this, parents might be tempted to skip over the activities thinking, “We already did that. ” But the truth is you haven’t done it this way, not with this additional bit of information or this increased bit of difficulty.

Even if you have done some of this before, there is no harm in doing it again, it is in the repetition of these games/activities that the student gains mastery over the material. In 8 months, he will have no trouble creating something as fun as  (1/45 x 45) + 3 = 10-6. He will do it not because you told him to, but because this is what his eyes have seen and his hands have handled for many months now. This is the creation of a student with real number sense.

There’s a predictable pattern Gattegno sets up when he introduces something new: one block to two blocks, two blocks to one block, two blocks to two blocks, more than one to one or more than one block. There is also a pattern for moving from the rods to mathematics as a mental activity. You can see that pattern below. There is another pattern he uses when moving the student from reading the rods to writing the math and back to setting up the rods according to written mathematical symbols.

Take out an orange rod and a black rod. We will place them side by side and ask, “Which rod do you need to put end to end with the black to make the length of the orange?” Which block, added to the black, makes same with the orange? Orange is having a party; black wants to go, who is she going to take?

Red will have a different complement in a different rod. To show this, simply take out a brown rod and place the red side by side and ask, “What is the complement for red in the brown rod?”, “What about in a blue rod?” Make sure your student builds those so he can look and measure as needed. In the textbook, Gattegno gives lists of rod combinations to use. There is nothing special about these combinations. Use those and use others. Make complete complement patterns for all the rods other than the unit. Don’t do it all in one day. Do it more than once. Do it until your student can tell you the complements of the rods from memory. I chose to alternate complete patterns with the following compliment activities Gattengo mentions in this section: 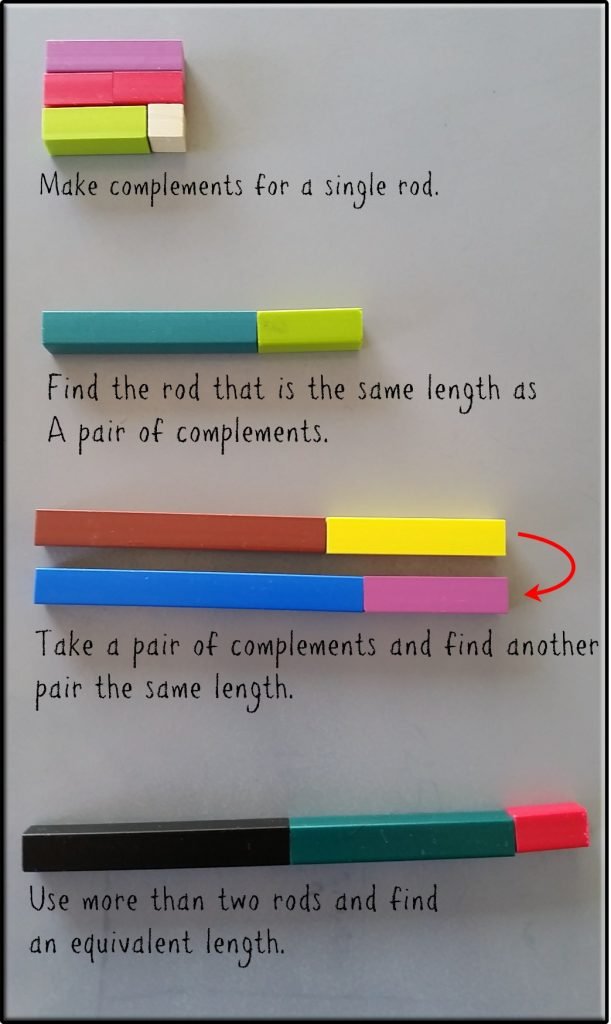 You can retire these kinds of activities if your student can successfully find the complement of any rod by: 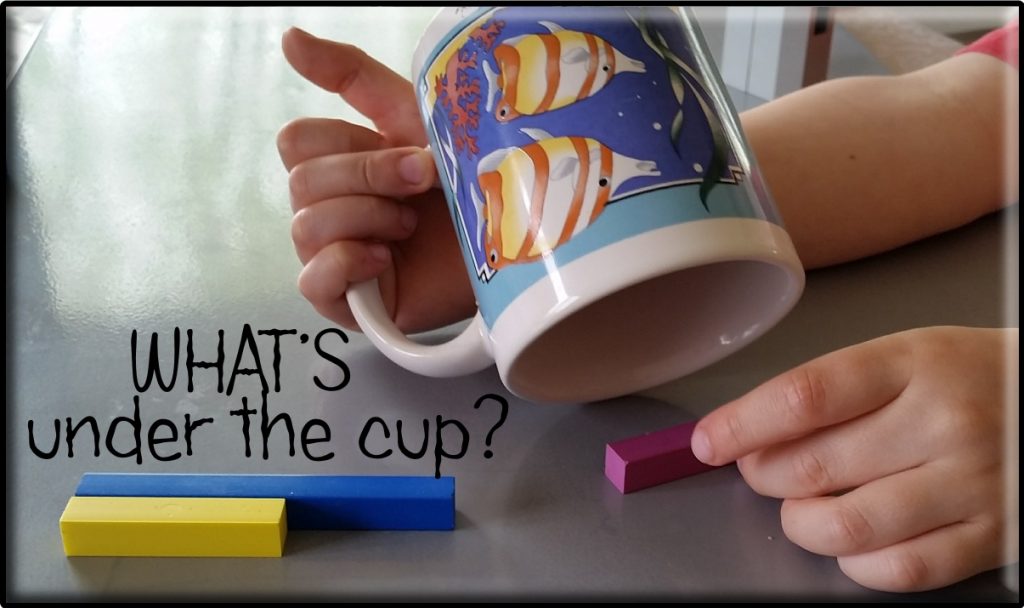 Sometimes we play “What’s Under the Cup?” For those not familiar with Mortensen Math, “What’s Under the Cup?” is a game all kids love. You hide the rod you want the student to find under a cup. The student tells you which rod they think fits the problem, and then the student lifts the cup to see if the she is correct. Sometimes I hide the complement in a bag and the student must pick the complement out of the bag which contains more than one rod. This means the student must have internalized the relative lengths of the rods.

If the student picks the wrong rod, ask him which rod he was searching for. If he knows the correct rod, but couldn’t choose the correct one, choosing a block out of a bag should be added to your activities rotation. 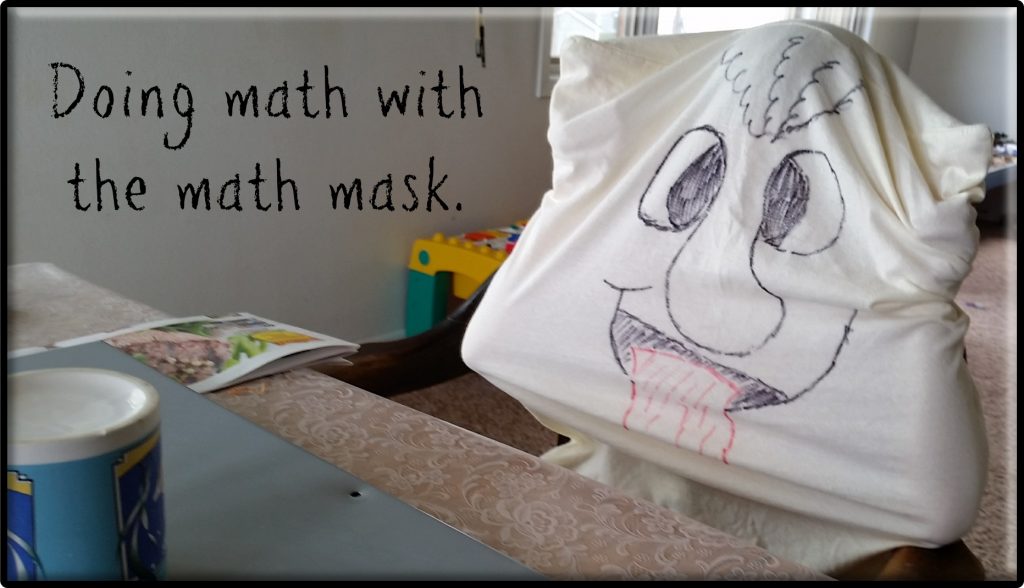 It’s not enough to say, “Do it from memory.” He’s a cheater.

If I want to know how much my son knows, we place a math mask on his head, and I ask:

What Are We Learning From This

Number sense is the new buzzword in math education. I’d like to develop this further at a later time, but I’m not convinced that many of the attempts to teach number sense are actually effective. Number sense takes time; it requires a certain type of math intuition or “knowing” about numbers and how they work. The advantage of playing with blocks is that they are the most mathematically accurate manipulative available. Cuisenaire Rods allow students to internalize the structure of mathematics. A lot of number sense activities tend to be a veneer to cover poor teaching. For the student, number sense just means translating what their eyes have seen and their hands have handled into the language of math.

Trains of One Color

We have reached Trains of One Color in Gattegno's Mathematics Textbook 1. We're covering exercises 20-30 of chapter 2. This post is part of a series of posts on using Caleb Gattegno's work to teach with Cuisenaire Rods. You can find the others by clicking here. Where are we headed with trains of one color? What can we be thinking about as our students ...