This blog post covers exercises 3 & 4 in Gattegno Mathematics Textbook 1, chapter 3. This is where Gattegno first introduces the student to the word ‘relation’. This concept is critical not just for these particular exercises, but for all of math. If you’ve paid attention to anything I’ve posted in the last year or so, you know that ‘relationships’ is one of my favorite words. It’s not really, but in the context of teaching children mathematics, they won’t get anything unless they understand this one thing. Oh, they might learn some facts, but they won’t get the big picture of mathematics because ‘relationships’ are the big picture.

Activities 3 and 4 are exercises in building staircases. We did this in chapter two. The last time we did it, the students became aware that there is something called a staircase, that the rods can be ordered smallest to largest or largest to smallest, and that there is an order to the rods. If they were astute, they might have noticed that each successive rod is larger by the same length. If they didn’t, that’s fine because we are going to measure that distance with a rod. Then we will ask the students to express the relation between two successive rods.

By ‘successive’ we mean things that follow or things in a row; consecutive. By ‘relation’ we mean how one thing or idea is connected to another thing or idea. When we say ‘express,’ we mean how we talk about or how we write about the relationships. Please note that where I quote Gattegno directly I will use his letter patterns for the rods. Otherwise, I will use the one we use at home. To see what we do, you can look here.

Understanding Addition and Subtraction As Relationships 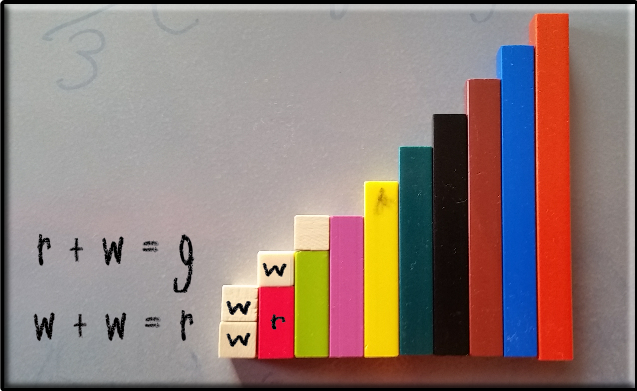 Likewise, the reverse is true. We can see that another way the rods are in relationship to the other rods is that each rod, when the staircase is read largest to smallest, is one white rod smaller than the one before it. We would express the relationship of the orange rod to the blue rod as orange minus white is equivalent to blue. The blue rod to the brown rod is blue minus white is equivalent to brown. Those expressions in written form are: o – w = e and e – w = b. 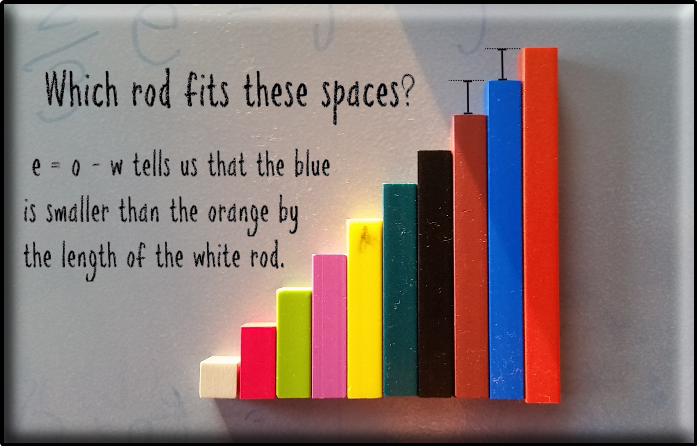 Conveying the Relationships to the Student

In exercise 3, Gattegno asks the student to, “Find the rod that measures the distance between any two successive rods in the staircase. O = B + w, tells us that the orange rod is bigger than the blue rod, by the length of the white rod, what do we learn from…” Here Gattegno offers four examples.

When he approaches subtraction in exercise four he explains that “B = o – w tells us that the blue rod is smaller than an orange rod by the length of a white rod.”  The student has now acquired the awareness that plus and minus describe relationships of larger and smaller. This removes that idea that the equal sign means “makes” or “turns into” or as Crewton Ramone jokes, “magically becomes.”

Gattegno argued for what he called the ‘subordination of teaching to learning.’ Believing that only awareness is educable in human beings, all of his material is designed to take the child from awareness to awareness.  I find his whole approach fascinating. I suspect this is somehow tied to how he was able to teach the entire curriculum in 18 months. While I have more of a relational understanding of math than many people I know, Gattegno has added layers to my understanding.

It was not until I came across this chapter that I became aware that o – w = e communicates something different than e = o – w. In the long run, does it matter which way it is written? Not if you are only concerned that we come up with the “right answer”. But if we are looking to generate awareness and flexibility with numbers, then it does matter. In the first expression, we are looking to find the rod that is a white rod smaller than the orange. In the second, we are stating that the blue rod is smaller than the orange rod by the length of a white rod. 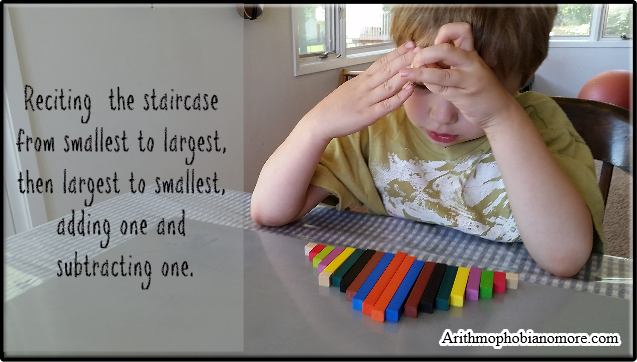 A Reminder About Written Work

In the text, Gattegno assumes the student is writing. In other books about the Gattegno method of teaching, it’s clear that not all children were writing. For young children, the work was oral and writing emerged as part of their natural growth. Where he says to write down the relationships, my young students read the relationships. Sometimes I will get o equals e plus w and sometimes I will get orange equals blue plus white. I don’t fuss. We are at the point that we need to be documenting more, which means I’m taking dictation. When P. dictates his work, I do require that he use letters to indicate rod names.

When do you insist that the student writes their work? I’m not sure. I can only tell you what my approach has been. When the student can focus on the math work instead of the process of writing, then it’s time to make them write. If your student is still learning the process of writing then either let them do their work orally and introduce writing later or take dictation.

Shameless plug:  This stuff looks fun and exciting, but you aren’t sure you are ready to take the plunge. No problem. Join us over on FB in our Arithmophobia No More closed group for base ten block junkies. We are a pretty easy going bunch, no one ever bites. What do you get? A group of people dedicated to eradicating all math fear and wiping away all math tears. You don’t have to be a math giant to join. But we do have some of those, and we’re kind of happy about that.

Language - What Do the Rods Say?

The title of chapter 3 of Gattegno's Textbook 1 is Literal Work. Most people use the word literal when they mean something more like actually or as an intensifier like really.  When Gattegno uses the word I think he means something like a literal translation; word-for-word. In this chapter, we are helping the students get command of the language of ...