If you are still with us after my little hiatus that included life and death, taking a newborn into our home, and attending conferences – – you know, that stuff we call life – –  we are plugging along in Chapter 3 of Gattegno Mathematics Textbook 1. You can find the rest of the posts in the sidebar under the category by the same name. This post covers the topic of brackets which are introduced in activities 13 and 14. For those of you who are new to this series, I recommend starting at the beginning and reading the series alongside Gattegno’s Book, which you can purchase here.

I’ve said before that this is not a standard curriculum. There are activities which need not be done in order. For example, we skipped all activities involving the use of brackets as my son wasn’t writing yet. His interest in brackets was piqued about six weeks ago. 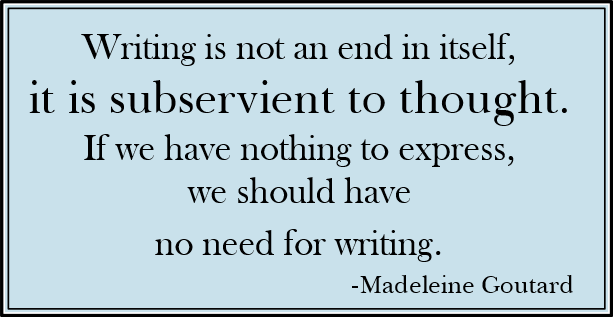 Our Introduction to Brackets

In my son’s case, who just turned six, we have time to play around. We’re not in a hurry. We used to be in a hurry, but I learned my lesson the hard way. When I think about introducing new material, I usually have two criteria in mind:

1. Is he bored with the current material? That is a firm signal to move ahead.

2. Does he require the information I have to express what he wants to express? Does he need it for ease of communication? Then it is time to make communication easier.

How does this apply to brackets? Let’s say that junior wants to communicate 7 – 3 + 4 orally. The answer could be either O or 8;  it just depends on what junior meant when he expressed the sentence. If we haven’t introduced brackets yet, now is the time to do so. Eventually, this will come up when playing around with the rods whether your child is an emerging writer or a  fluent writer.

So much for plans. This is how brackets got introduced in our house:  A little over a month ago, my son found the brackets in his math cards (download here) during free play. He asked what they were for and how to use them. Conversation went something like this:

P: What are these?

P: What do you do with them?

Me: You need them if you want to others to understand your math compositions. If you put brackets around something it means you meant for that stuff to stick together.

Me: How do you want to use them?

He placed the following cards together: (b + r+ y).

Me: Well, think about it and get back to me.

Me: I want you to think about it and get back to me when you think you have a good answer.

P. thought about brackets for a couple weeks without much progress. He used brackets because he liked them, but he had no reason to use them and no context for understanding their use. It took me awhile to think of a way to force his awareness. It shouldn’t have been that hard, but sometimes I’m a bit slow on the pick-up.  Of course, I introduced the substitution game which I learned about at the Gattegno Conference at the BBL  The game is simple enough. You start with an equivalence. Each player takes turns substituting one number (or letter) with another way of saying that number.

I created this simple video to explain the game. There is no need to use roots or fractions, but I did for demonstration purposes.

Me: Are both sides of the equal sign equivalent?

Me: Do you think I made a mistake when I wrote it down?

Me: Did you make mistakes when you substituted?

Me: Did you read the rods correctly?

He: I thought so.

Me: Do you think there might be a problem somewhere else?

There was a long silence. I wanted to tell him, but I had a baby in tow and had to go feed her. I came back 20 minutes later with more blocks scattered about. By then the urge to tell was gone.

He: You made the mistake. You didn’t write what I told you to write.

Me: What do you mean?

He: All our parts are mixed together.

He: I can’t tell which letters are together. I don’t know what my substitutions are.

Me: I wrote what you told me to write. It isn’t my mistake. Look in your math cards and tell me if you can find something that will help us keep the substitutions together.

He, with a big grin: BRACKETS! 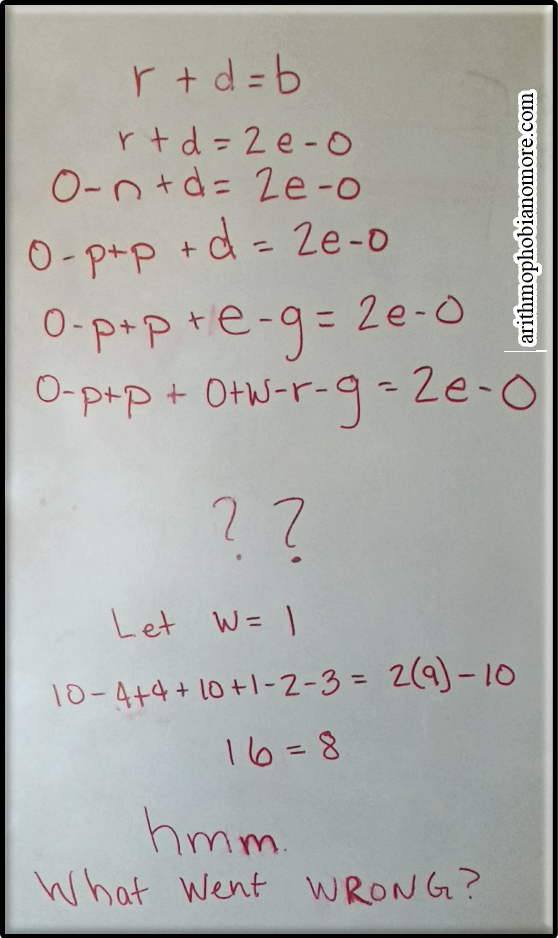 Transition Back to the Textbook

Now that we’ve introduced brackets we can do exercises 13 and 14. I kept feeling that I was going to have to do some explaining as Gattegno doesn’t offer much in the way of questions for those lessons. He is very straightforward. This expression needs brackets, this one doesn’t. Put brackets around the following expressions that need them. Maybe he felt that working out the problems would enable a child to figure it out. But I think he must not have encountered a child like mine. Or he assumed the teacher could figure out what to ask, but I was a young mom homeschooling once, and I wouldn’t know what to do.

Awarenesses my son needs to have to complete this task:

My questions and tasks related to these exercises need to assist P. in developing both of these awarenesses. One of the things we’re going to do is spend a day playing around with cards and blocks and placing brackets at random then recording our findings. We will want to see if we can make rules for when brackets are needed and when they are not. It will be helpful to note which combination of operations and brackets will have an effect on the outcome and which ones do not. Perhaps we might even be able to reason ‘why’ there is a change in outcome. That may be pushing P. too far in one sitting. He is a slow thinker. We already know that brackets can be used to keep things together that we want kept together. But now we need to know how and why that all works.

We are nearing the end of chapter 3 of Caleb Gattegno's Mathematics Textbook 1.  Next week, we cover fractions and then we move onto chapter 4 and the introduction of numbers. If you're new to this blog, please see the other posts in this series by clicking here.  We are working with multiplication which covers activities 15 - 19 of chapter 3. ...