Halving, doubling and tripling are closely tied to the factoring and towers. So we are going to sort of pick up where we left off in the last post. I hope what you begin to see is that you can't just take these ideas and separate them. Gattegno was trying to get across one main idea in the elementary years and that is that all of this is basically same stuff. We have just a few structures on which we build our math understanding - the rest is language.

In textbook 2, you'll come across what Gattegno calls "milestone numbers". These are numbers built by repeated doublings and tripling prime numbers and are a springboard to richer understanding and study of multiplication, division and geometric progressions.

I don't use this chart, but I do use the products set as the basis for studying numbers 20-1000. If you want to use  the chart, you can get it here and NRICH put out this pdf to help teachers use the products chart and cards. You can certainly make one for your own use yourself, as they still under copyright.

Gattegno felt that the products set is the most important numbers to study when studying numbers 1-1000.  These are the numbers, in addition to the number 11 and it's multiples, that we concentrate on.

If, perhaps, you skipped over the doubling work in book 1, never fear. It is not too late. Just start with 2 and practice doubling. How much is two 2's? Now that we have built that, how much is two 4's? How about two 8's?

Are there patterns that you can find when you double? How can you learn to do this easily in your head? 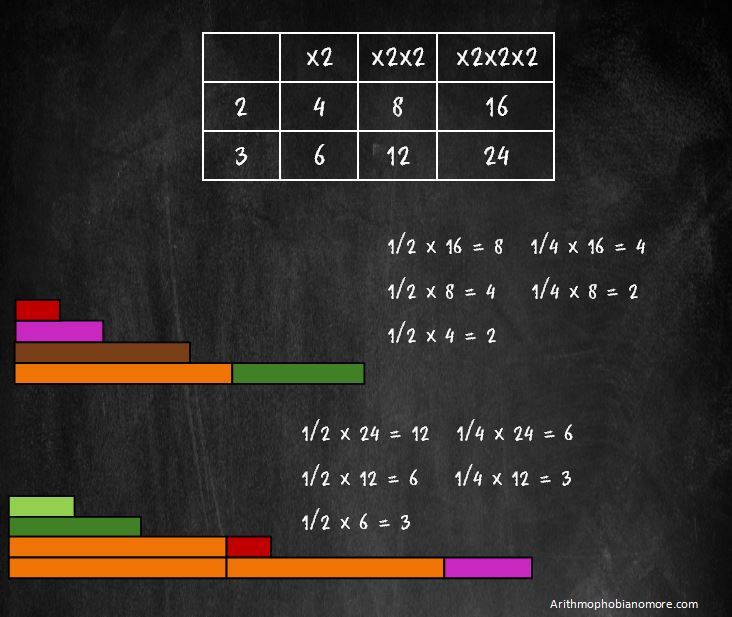 What could we notice on this image?

1. When I double and double again, I am multiplying times 4.

2. When I halve I am dividing by two.

Last post, I  I used a tower to show factors. We looked played with the factors and how we group them using the Associative Property. There is a lot more to explore with towers than just grouping factors.

Halving, doubling and tripling can make short work of the multiplicaiton table as well. There is only one multiplication fact that must be memorized: 7 x 7. . The tens are easy, there is a pattern. Nines shouldn't be an issue as you can follow the nine pattern. All the rest can be found by halving, doubling and tripling. Does that mean student's should memorize the multiplication table? No, that is not what I'm saying. But I am saying that drilling them until they hate math and maybe even you is a bad idea. It is better to study the table, look or patterns and practicing halving and doubling.

Most of us, with practice, can double numbers in our heads. Becuase I taught my son to add and subtract mentally left to right, we count the largest place value first. The self-talk for doubling 365 would look like this: 3 + 3 is 6 hundreds plus 6 + 6 = 12 tens that gives me one hundred plus 2 tens, 7 hundred twenty plus 5 + 5 that is one more ten. Seven hundred and thirty.

Gattegno has students breaking apart numbers in this fashion from the very beginning so that they can manipulate them according to the rules of the operation they are working with in a way that makes sense to them. This is what I mean when I ask, "How can we take what we know about this and use to it make solving the problem in front of us easier?" Lacy, from Play, Discover, Learn 24/7, calls it, "Teaching my child to use his innate laziness to become more efficient."