Exhausting Relationships: Learning the Rules of Algebra from the Beginning 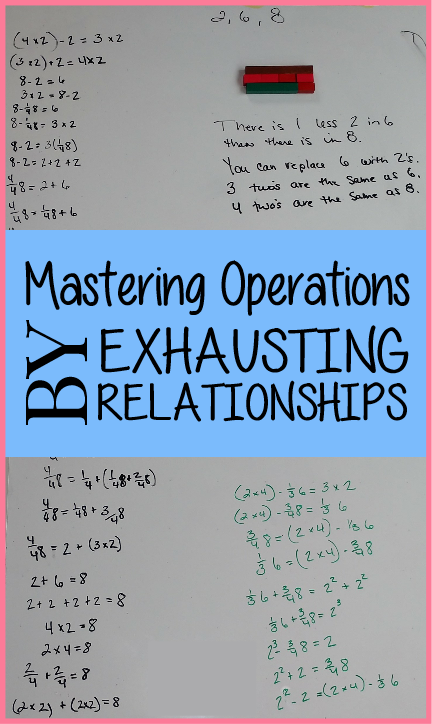 I have a confession to make: we didn't do very much math or school over the summer. Last week, we officially started 2nd grade and I have to admit it was hard on P. The summer slide is real. To make things easier I started with an activity we've done a lot of - Exhausting the Relationships.

Exhausting the Relationships is pretty easy. Choose a rod, then make train that is equivalent to that rod. Now you have either three rods or three numbers about which you can explore the relationships. Our rods were red, dark green, and brown. P chose to go with numbers which gave us 2, 6, and 8 to explore.

Before we jumped into the math, I had P do a bit of noticing and wondering about the structure. What was going on?

Here is what we noticed:

This is pretty basic stuff right there. Unless you are noticing longer-shorter and colors, which we aren't anymore, there wasn't much more to notice if you aren't using math language. That was the point actually. There are basically 4 things going on, the rest is the language we'll use to talk about the 4 things that are happening.

This is where the algebra comes in and where Gattegno is a master teacher. Clear back in chapter 3 of book one, students spent a lot of time manipulating the rods and the symbols. Students learned by shifting rods around the limitations of what could and couldn't be done with the rods. Then we added symbols. Students were learning the rules of algebra. They learned what the symbols mean and the rules for manipulating the symbols. That is algebra. That is where we start when we use Gattegno. When we get to numbers - everything is easier. 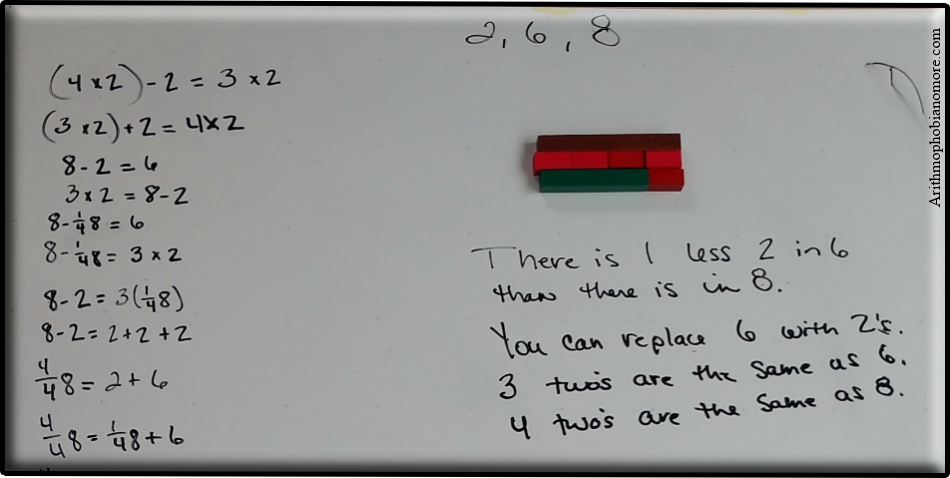 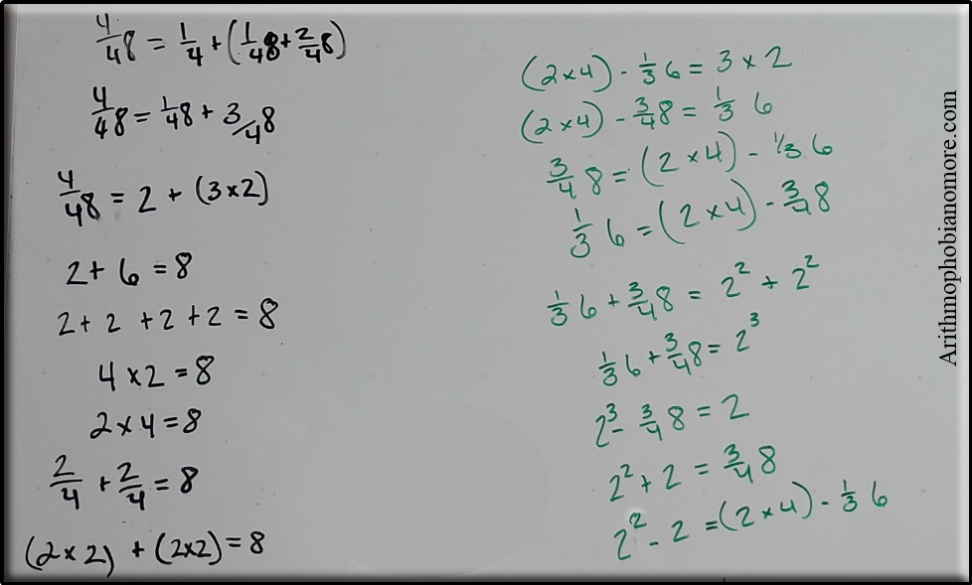 For those of you in the know, this looks very similar to the substitution game with some constraints added. Which, it is. Instead of working with a single operation and substituting numbers, any numbers, we've chosen to limit the numbers but use any operation. Both ways of playing the game are useful.

The more operations of which the student is aware, the greater number of options the student has when exhausting the relationships. If I don't know what to call 2 when I mean one of 4 sections of 8, or how much 2 is of 8, then I won't have fractions at my disposal when I exhaust the relationships.

Doing this activity, like playing the substitution game, helps the students see how all the operations and fractions are related to one another and how it really is all the same stuff. 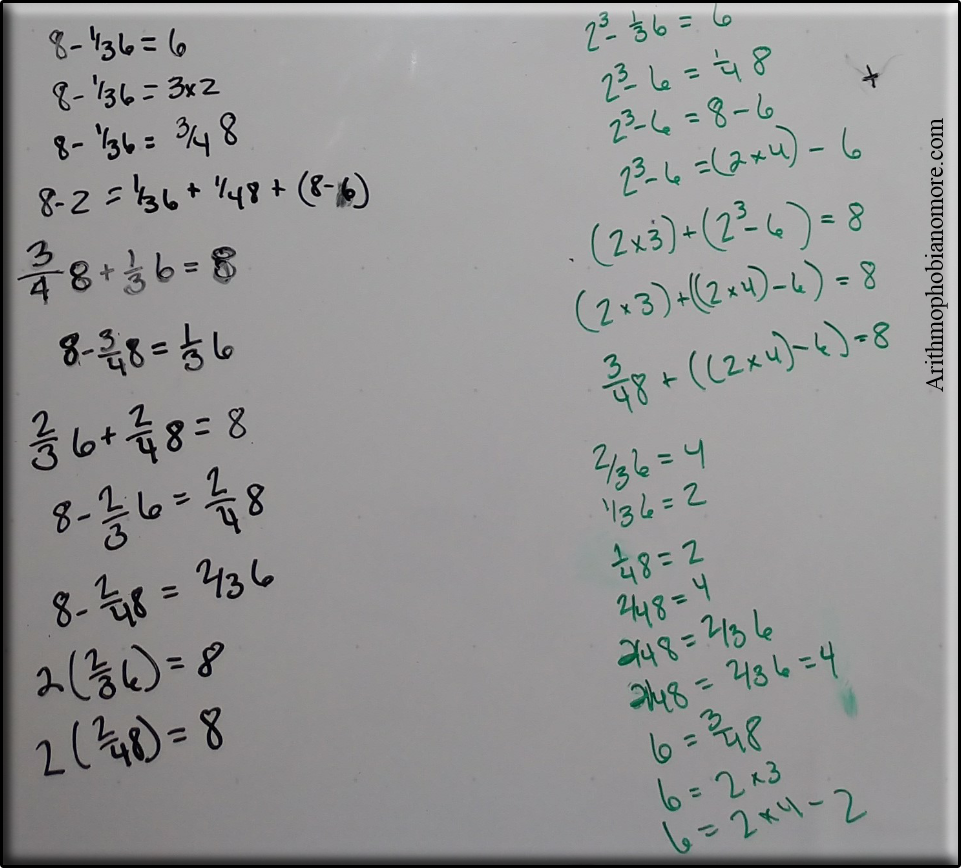 This exercise can be boring and drudgery or it can be fun and a bit like a treasure hunt. It all depends on how you introduce and play it. And it also depends on how long you play. If you play till your kids can’t think anymore and you push them beyond their attention span, they will likely hate the activity and never want to do it again.

Since I’m a pusher by nature, I decided to break this activity up into several days and I set a time limit of 15 minutes. I didn’t make P. do this alone. We played the game together. He would suggest an expression, I would then restate it in a different form. Sometimes I would suggest an expression and he would restate it in a different form. We played around with all the operations and fractions.

At the end of our lesson on day 1, I was surprised by how many statements we made and we weren’t done yet. On day two, it was harder to find expressions so both of us had to get more creative and figure out new ways to manipulate the symbols. It kind of reminded me of playing The Substitution Game: Building Crazy Equations. When we added squares, things got more interesting. I had several "Aha" moments. And I realized that just using these 3 numbers and adding exponents, it would be hard for us to exhaust the relationships.

I am often struck by the beauty and simplicity of mathematics. We used just 4 symbols and fractions - those symbols plus the numerals can express a wealth of relationships. While it's true it's all the same stuff, at the same time, it's not. 2 groups of 3 are 6. 3 groups of 2 are also 6. The result is the same, but it's not the same thing.

Exhausting The Relationships: Making It Easy

Now any of those could be substituted for the 8. Once we insert the substitution we could then write those statements in different forms. That will get boring after awhile, but having that option when it is the students turn, can help them get through a round if they haven't thought of anything.

Each new statement is a variation on substituting. Another way to play this would be to write statements about 2, 6 and 8, put them in a list and allow the student to mix and match statements and see how many you can create.

Exhausting Relationships: Why We Start with Colors and Symbols

I received several emails recently asking questions about why we start with colors vs. numbers and counting. I've addressed this on multiple occasions. But I think this particular activity is a great example of exactly the kind of math student that Gattegno is seeking to create.

Why do we start with colors? We start with colors and we don't mark off the rods because numbers aren't objects. The red rod is no more 2 than two cows are 2 or the symbol "2" is two. The name for the red rod is just as easily a third of 6, or a third of 9, or a quarter of 8 or even 20. There is nothing special about the red rod that makes it two. It is only two in relation to the white rod if we call that rod a unit.

But beyond that, Gattegno starts with symbols and not counting. He said, "The teacher looks after the symbols, the understanding takes care of itself." He meant understanding of numbers. His intention was to create master manipulators of symbols. Why? Because that is what mathematicians are. One mathematician who ran with Gattegno's ideas was Dick Tahta. Steven Hawking said Dick Tahta was the best teachers he ever had.

When we start letters, we allow the students to master what the symbols without the distraction of having to calculate. Calculating takes very little time to master especially for someone who knows how to use algebra (the study of mathematical symbols and the rules for manipulating those symbols) to manipulate those numbers.

How does one teach a 2nd grade student to exhaust the relationships found in the numbers 2, 6, and 8? We start with letters and we focus on manipulating the symbols.

We are back in the full swing of school. I've gotten a few emails about Gattegno's Mathematics Book 2 - where is he going with this and why are we doing addition and subtraction the way he does it? I thought I'd take the next couple blog posts and go over textbook 2 with a mile high view: share the main concepts, discuss where it's headed and maybe ...