This blog post is part of a series of posts on the Gattegno Mathematics Textbook 1. If you are interested in the previous posts, you can find them here. We’re in chapter 3, and we’ve come to the section on equations which covers activities 10-12.

Gattegno defines equation as any of the writings we can put down for a pattern that has two equivalent lengths. Notice here that writings is plural, which means that any given pattern with two equivalent lengths has more than one equation that will go with it. Even if we are only using the operation of addition, we can write three equations from a pattern of one rod that is equivalent to two rods by removing one. Gattegno uses a square to indicate that one of the rods has been removed from the equation. 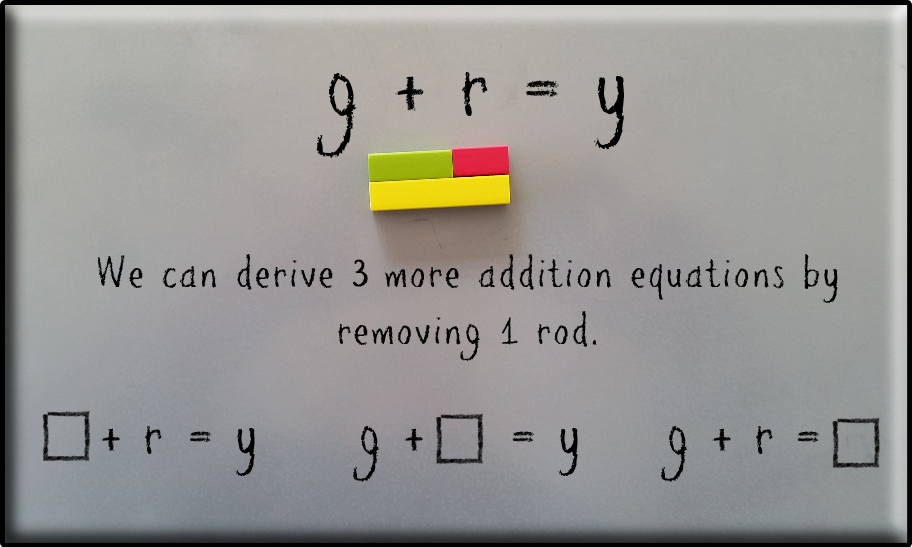 In the above example of green plus red is equivalent to yellow, we can derive three different equations from the original one. And if we remember our lesson from the previous section, each one of those equations can be written in 4 different ways. That means that there are 12 possible ways of writing the addition equations for green plus red equals yellow. This concept is tough for many children to grasp, which is why they need time to assimilate the material.  They need a lot of practice handling the rods and manipulating them.

When an adult approaches the material in this section, it seems like it should be easy, but I’ve yet to see a child who catches on to this quickly. I tutor an 8-year-old who grasped the concepts when we did it orally. When she saw the concepts written out, it was a struggle. I’ve heard the same from other parents.

Let’s assume you decided to skip some of the “easy” work in the last chapter. Or perhaps you decided to move ahead before your student had committed a good deal of the rod equivalencies to memory. Now let’s assume you have an emerging writer. Also, let’s throw this section on equations on top of the two previous assumptions (not that any of you would skip ahead to get to the “real” math), your child will end up frustrated. Our working memory is limited. If the student wasn’t given sufficient time to integrate the rods, and his writing isn’t second nature,  and he is now called on to write out the ideas contained in this section, do you see how we might be asking a bit too much? That is like asking an adult to multitask 3 different activities. Just in case you didn’t hear, multitasking is a myth.

When we first started working through the ideas in the equation section, it took us several weeks. That doesn’t mean that’s how you should do it. Part of the glory of Gattegno is that it isn’t a set curriculum. You pay attention to the student. Is she struggling and CAN’T figure it out? Then ask questions and determine where the problem lies in her understanding. Is he struggling but can figure it out? Then the student just needs more time. 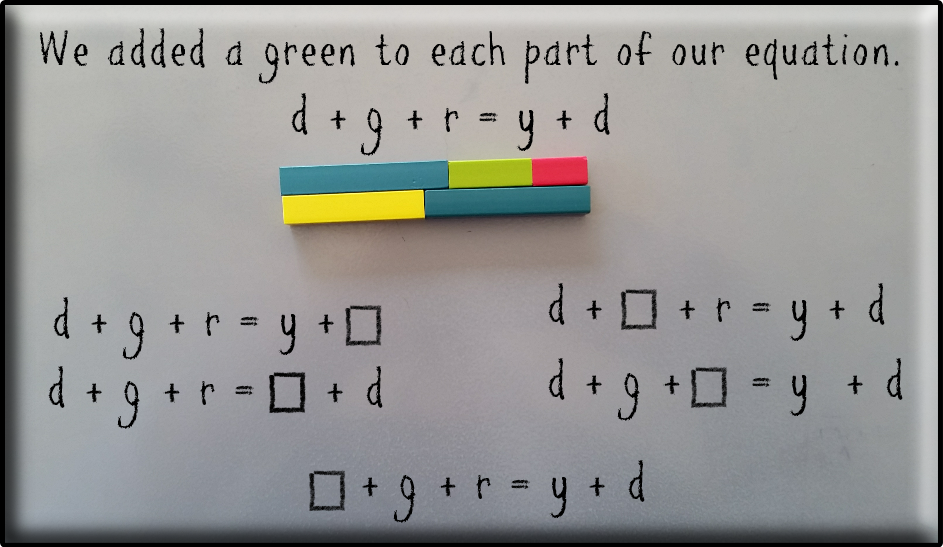 We worked through the material in the following manner:

Once we practiced this, we moved on to subtraction. This part should be relatively easy if we’ve done our job in the previous areas. By now our student is good at moving the equal sign around and recognizes addition and subtraction as inverse operations. Gattegno has the student find the answer to subtraction problems and then asks the student to find the missing rod. Again the problems are arbitrary. We followed the same pattern above for subtraction. We did the above steps with subtraction in one sitting, though we are still working on doing it all from memory. 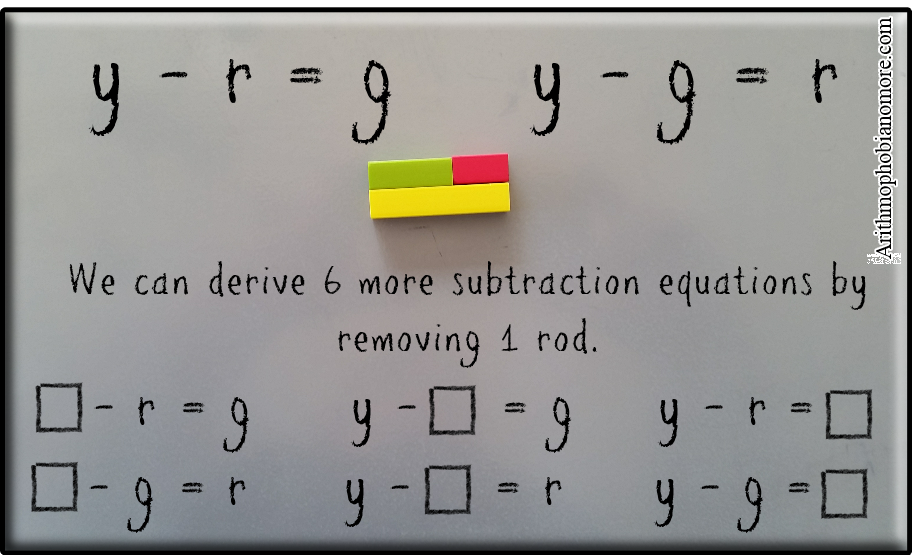 The following is from a Wikipedia entry on Caleb Gattegno. It's a pretty good distillation of the stages that children need to go through when learning something:

The role of the teacher in acts of learning is not to inform their students of this or that piece of information, but to help them to discover it, to perform a conscious act to become aware of it.

Gattegno suggests that learning takes place in four stages which can be described in terms of awareness.

The second stage: As soon as I start to learn, I have to explore the situation in order to understand it. As I am not yet an expert in the field, I make many mistakes. These mistakes enable me to progress because by observing what happens and becoming aware of it I can adapt my attempts in relation to the feedback given by the environment. This stage ends when I know what I have to do, but I only succeed when I am wholly present in what I am doing.

The third stage is a transitional stage. At the beginning, I am able to do what I want if I pay attention at each instant. At the end of this stage I no longer need to pay attention: the new skill has become completely automatic and because it is automatic, I am free to give my attention to learning other things.

The fourth stage is that of transfer. For the rest of my life, what I have learnt can be used for all the new skills I may wish to acquire. When I learnt to run, I used the know-how I had acquired from learning to walk. Both of these, walking and running, were useful to me when I decided to learn cross-country skiing. Each skill remains available, except in the rare cases of accident or injury, for a lifetime.

This activity is nothing more than the 'what's missing' activity we did in the last chapter.  What we have added is the new awareness that they are called equations. Also, we are asking the student to read the equations that have a rod missing, build the missing equation, and then find the missing rod.

Post Gattegno Cuisenaire Conference wrap-up, I can't get it done in one post. Instead, I'll break down the salient points in a series of posts. Arbitrary and necessary is where we're starting. This idea has rocked my world. It was worth the price of admission for this idea alone. Day One Morning Session Monday morning started out kind of slow. We ...