The last few weeks I’ve come across a lot of stuff about young children and their confusion with the equal sign. I’ve tutored quite a few students who come to me thinking that the equal sign means “Write the answer here.”  I’ve been very careful about what I say and how I present equivalencies since I discovered how confusing this is for kids.

Given my heightened sensitivity to this subject, it came as a shock that my 5 year old was confused about what the equal sign means. How this got twisted in his head is forever a reminder that we are dealing with young children who don’t have a firm grasp of the language they speak. I can think back to my own math education and how much confusion has been cleared up in the last 6 years. I didn’t develop a relational understanding of math until I discovered base ten blocks almost 2 years ago.

If you are working with kids, they need time. They need time to play with the ideas and wrap their heads around the concepts. And concepts need to be approached from multiple directions. Does doing math this way guarentee no confusion? Nope. But it does help minimize it. And if we are educating a child’s awareness, much of the areas of confusion will eventually sort themselves out.

So my discovery began when Lisa Cranston @lisacran tweeted this:

Kids said only the third one was correct as it is written ‘the right way.’ What does = mean?#etfopleymath pic.twitter.com/7YutYR6wpr

Since I have this on-going love affair with base ten blocks, I tweeted this in response:

I have to say that I was pretty sure that none of my students would ever suffer from equal sign confusion. But just to be sure, later that day I was driving with a 5-year-old in tow and began to ask math questions. I wanted to make sure we really understood the equal sign.

Me: Do you know why?

He: They are the same.

“YES!” I scream to myself, the internal voice of triumph is silenced for the greater good.

I can sense his irritation with this line of questioning. This kind of stuff is for babies, but I beg for one more.

Say what? I try hard to hide my shock.

Me: Do you know why not?

He: Because they’re not different.

I was genuinely perplexed by this. Ten and ten aren’t equal because they’re the same?

After a few more questions that required him to think about what same and equal mean, we had a great conversation about counting and comparisons. It seems that he got the idea that things are only equal when we compare things that are different; which was a reasonable assumption to make as I rarely, if ever, compared things that are equal in all their attributes. I never compared a yellow rod to a yellow rod or a blue rod to a blue rod.

Me: I have two fields. In one field I have five dogs and in another I have five cows. Are they equal?

He: Cows and dogs aren’t the same.

Me: I have two fields. In one field I have 5 dogs an in the other I have 5 cows. Does each field have an equal number of animals?

He: Now they are equal.

Me: So it depends on what we are counting?

Me: So does it depend on what we want to know about what we are counting?

We obviously have a bit of work to do on this. That’s ok with me. That is part of the joy of using Gattegno. We’ve got time to explore equality, sameness and attributes.

Equal and Which One Doesn’t Belong

This made me think about something else that’s been passed around on the Math Twitter Blog-O-Sphere: Which One Doesn’t Belong? @WODBMath. It reminds me of Sesame Street when I was a kid. “One of these things is not like the other, one of these things just doesn’t belong….”

The idea is to place things that are similar, but different, together and ask the student to pick which one doesn’t belong. There is often more than one right answer. What matters is that your student can justify his answer. We did this with our Cuisenaire Rods. We explored what makes things parts of a set, we discussed attributes like eye color and block color. We discussed shapes and ways to measure. It was a fun couple days. The answer to what makes things equal? Context, context, context. For arithmetic = means quantity. 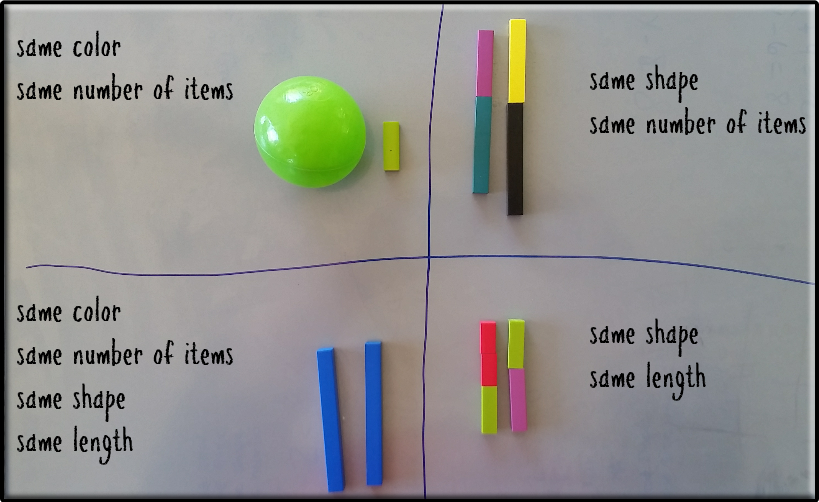 One of the things I love about homeschooling is that I get to learn about my child. I have time to hear his reasoning. We have time to explore the things he thinks about. I have the time discover that he has acquired the idea that things that are the same can’t be equal because they are not different.

This blog post covers exercises 3 & 4 in Gattegno Mathematics Textbook 1, chapter 3. This is where Gattegno first introduces the student to the word 'relation'. This concept is critical not just for these particular exercises, but for all of math. If you've paid attention to anything I've posted in the last year or so, you know that 'relationships' ...