In the history of base ten blocks,  Caleb Gattegno’s name cannot be ignored. In fact, according to Icons of Mathematics: An Exploration of 20 Key Images by Claudi Alsina and Roger Nelson, Gattegno was one of “the most prolific and influential math educators of the 20th century”. In mathematics, he is best known for popularizing Cuisenaire Rods and his innovative mathematics curriculum Visible and Tangible Math.

Gattegno did not set out to teach math to children but suggested that our end goal should be to create mathematicians. One of his more radical ideas was that small children could learn algebra. Not only were children capable of early algebra, but that they should be taught algebra before arithmetic. In a previous blog post, I mentioned that children can and do use algebraic thinking as soon as they begin to use language. This idea is not my own but is expressed in various forms by Caleb Gattegno, Zoltan Dienes,  Ian Benson and Rudolph Arnheim.

“Algebra, just as arithmetic, has a thoroughly perceptive basis. In fact, C. Gattegno’s suggestion that algebra should be taught before arithmetic is psychologically sound. Perception relies largely on relations rather than absolute values, and generalities preceed particulars in sensory experience. The colored Cuisenaire sticks represent relations among quantities; their absolute length is irrelevant and readily transposable.” Rudolph Arnheim, Visual Thinking 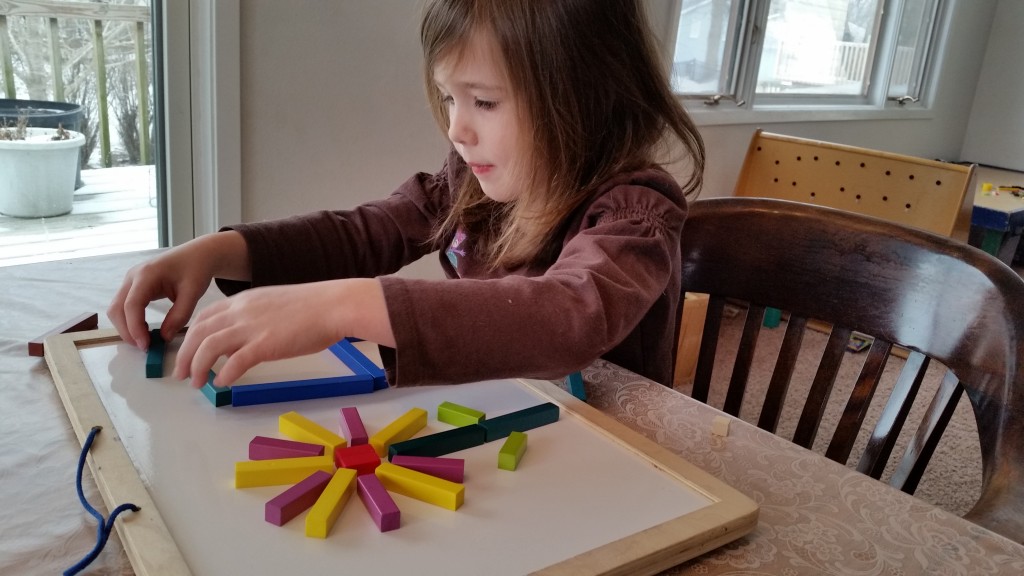 A. during free play.

It is this innate understanding of the world that makes it so easy to teach algebra before arithmetic to children at the earliest ages. Toddlers know “birdie” long before they know bluejay, sparrow, chickadee, or cardinal.  Generalities to particulars are how children learn. Without the distraction of numerals, the concepts of the math are readily grasped.

“Mathematicians use algebra to represent and reason about mathematical objects and actions. Gattegno showed that infants [pre-k/k]  can master algebraic expressions using all four operations and fractions as operators.” Ian Benson, Getting Started with Early Algebra in Primary Mathematics Spring 2015   http://www.m-a.org.uk/

The above quote is from Dr. Ian Benson who heads The Early Algebra Project that has run pilot programs across the UK in the past 5 years or so. They have found that a careful use of Cuisenaire-Gattegno by competent teachers cuts the time it takes to master primary mathematics by 1/2. The children were not only able to regurgitate correct answers but became fluent in the use of mathematical language and could articulate math concepts in their own compositions. This was precisely the goal of Caleb Gattegno.

Caroline Ainsworth, a teacher from the Stockland Primary Academy in the UK, has experienced similar success as a math teacher in the primary grades. Not only are her results repeatable, but her children have grown in their ability to use and express mathematical concepts with great fluency. She came across the work of Madeline Goutard, who worked closely with Gattegno, then decided to use Cuisenaire Rods in her classroom.

“Inspired by seeing examples of her children’s independent mathematical writing, I hoped to understand and perhaps even replicate the fluent, complex and creative mastery of expressions achieved by Goutard’s children. . .

Now, three years into my research, encouraged by rising SATs results and children’s confidence, I am convinced that this early mastery is not only possible but vital to children’s later success in, and enjoyment of, mathematics.  Whilst I do not claim to have reached Goutard’s level of skill as a teacher, I have seen enough to share her belief (and that of Gattegno) that young children are capable of far more than is currently expected of them.

As a result of this research, I now understand that the key to this theory is to teach children, from their very first encounter with the subject, what Gattegno called the ‘algebra’ of operations, made possible through specific use of Cuisenaire rods.”  Caroline Ainsworth 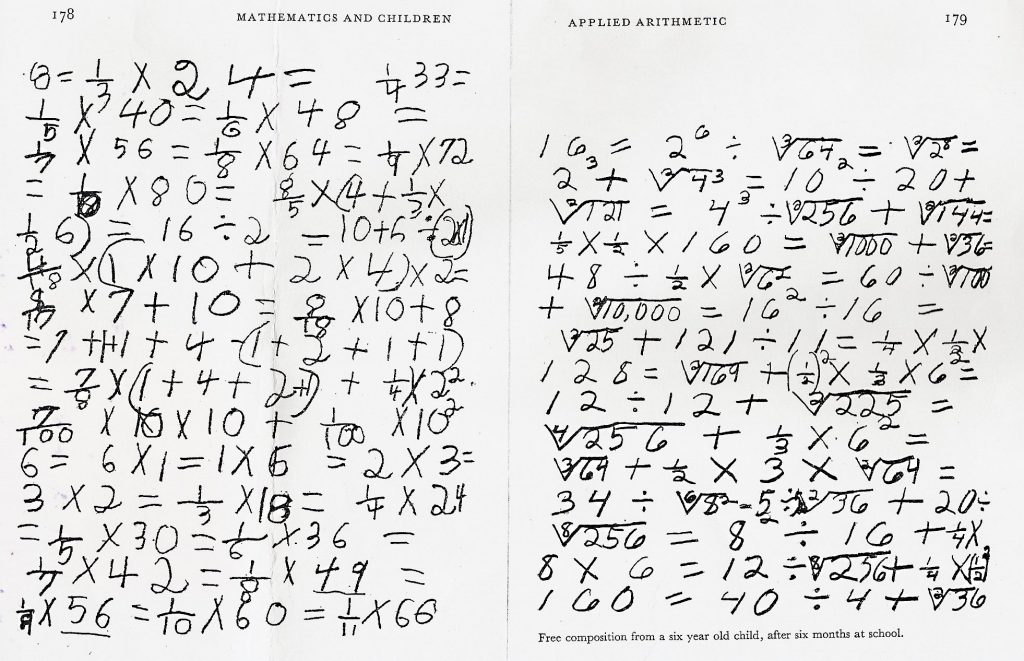 Student, age 6, from Mathematics and Children by Madeleine Goutard, 1964

It is the introduction of algebra before arithmetic  that allows for the kind of work that Goutard’s children regularly achieved in a short amount of time. Cuisenaire Rods are not used as a calculating tool to “get to the right answer” but as a way of presenting what can be generalized about numbers and their operations. Children learn the rules of manipulating the math symbols without having to count on their short term memory for basic math facts.

Cuisenaire Rods found growing popularity in the 1950-1970s. But by the 1980s, their use began to wane. It appears from the work of Ian Benson, a Stanford University and Kingston University Professor, that one of the contributing factors to the decline in the use of the Cuisenaire-Gattegno method is the general lack of mathematical understanding among teachers. This seems to fall in-line with the same observations by Lipping Ma. Caroline Ainsworth describes her initiation into the Cuisenaire-Gattegno method by way of working through all of Gattegno’s textbooks herself.

What I suspect is that math is hard to teach well without prior understanding. As a homeschooling parent, I can read and learn history alongside my child, teaching Latin is a bit different. One must know something of Latin to be able to teach it. It is the same with any language, math included. What makes the Gattegno method so outstanding is that a parent can take up the textbooks and a couple of guides and work their way through the material quickly and painlessly. I have not found a math option for homeschooling parents that provides the kind of fluency and mastery that Cuisenaire Rods, and base ten blocks in general, provide.

I am well aware of the difficulties that Cuisenaire Rods present, but I am also convinced of their superiority as a mathematical model. It seems that, as a community and with some effort towards parental development, that we can all have the kind of success that Gattegno and Goutard experienced. This will likely mean that parents, like Mrs. Ainsworth, will have to pick up their rods first. Fortunately for us, Mr. Gattegno wrote much. And he had dedicated followers in C.E. Chambers and Madeliene Goutard who spent years teaching teachers how to make this work.  We are not reinventing the wheel. Rather, we are standing on the shoulders of giants. If you are interested in joining a community of Cuisenaire and other base-ten block users, you can find us in our Facebook group here.

Want to Learn Gattegno Start HereGattegno Mathematics Textbook 1. This is the first textbook. It seems small, but there is enough material for a couple years of work in pre-k through first grade. Even if you are starting with an older child I would start with the algebra first portion. https://issuu.com/eswi/docs/gattegno-math-textbook-1The Cuisenaire ...