Post Gattegno Cuisenaire Conference wrap-up, I can’t get it done in one post. Instead, I’ll break down the salient points in a series of posts. Arbitrary and necessary is where we’re starting. This idea has rocked my world. It was worth the price of admission for this idea alone.

Monday morning started out kind of slow. We were given a set of problems and asked what we would teach children about those problems. We were then separated into groups and told to pick one problem, discuss what we would do, and write it on large sheets of paper.  Then each group was to pick a spokesperson that could explain our reasoning to the rest of the group. I’ve been around Gattegno enough that I thought I had this all wrapped up. The equal sign situation should have brought me up short but I’m a slow learner, what can I say? 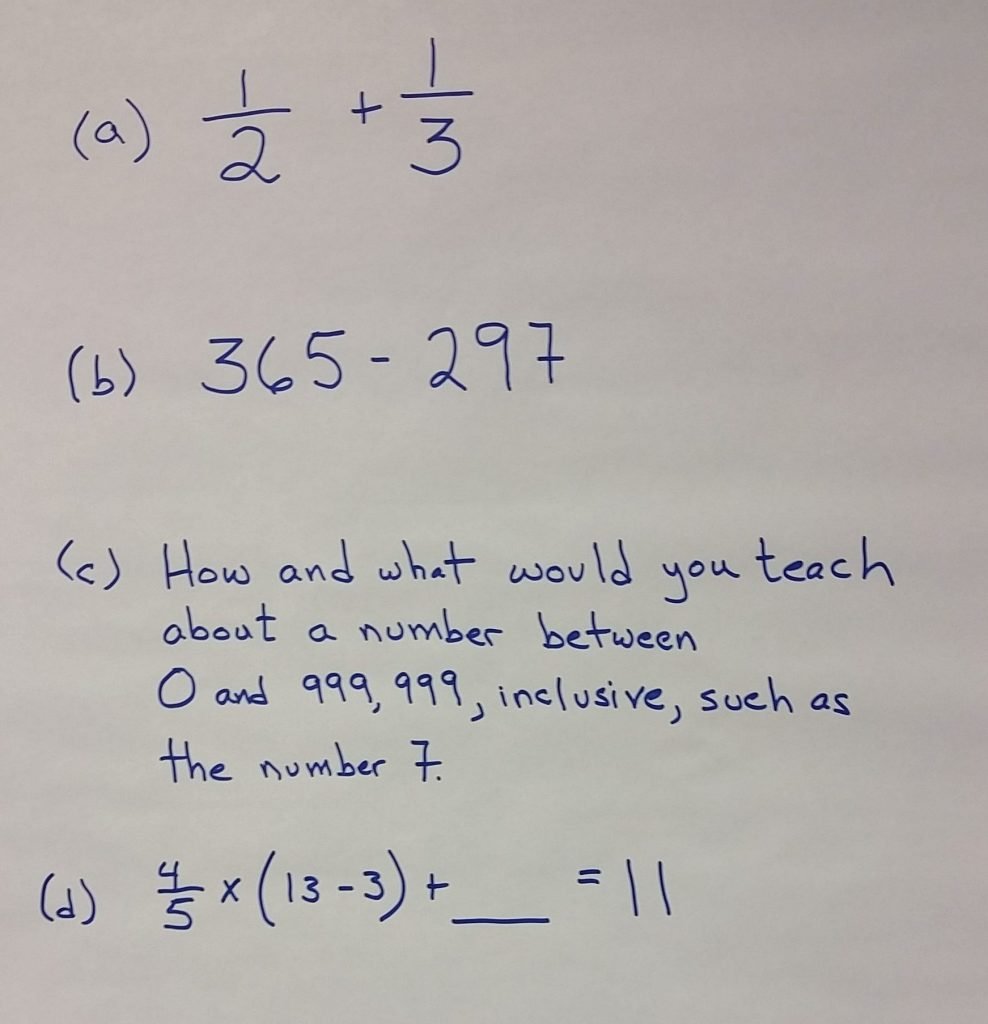 So, I’m in my little corner with a couple of BBL teachers and we’re going on about what we would teach. We’ve got two columns. The first column contains what the teacher is doing, the second column is what the student is supposed to be doing. We’ve got this covered, so instead of doing one problem we do several. I expected it to go slow because we had brand new people there who had never worked with the rods before. By now, I’ve got this smug, “this ain’t nothin’ new” attitude happening. Some of you know what I mean, I don’t have to call you out. You know who you are. Morning session ends when Dr. Powell reviews a couple of the posters and asks some questions of each of the groups. 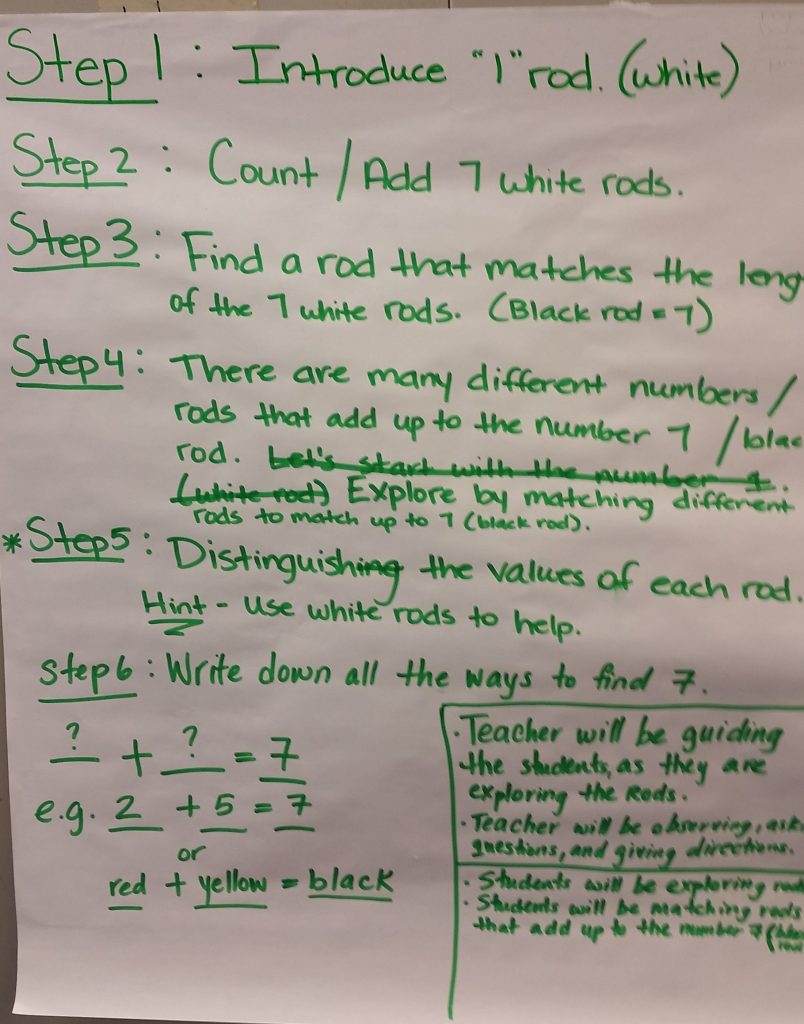 An example of the morning session work. Our picture didn’t turn out well.

I assumed the afternoon session would begin with a review of the other posters. Nope, he never discussed them again. Instead, he began with a conversation about what kinds of information are involved with teaching students. He separated the information into two types: arbitrary and necessary.

Arbitrary information is information that someone could never figure out on their own. It is cultural information that must be passed on to someone else. English speakers call the stuff that grows out of our bodies ‘hair’. The octagon shape, colored red, tells Americans that they should stop. The symbol ‘2’ is called two. You could study the stuff the grows out of your head all day and never come to the conclusion that it is called hair. There is nothing about it that would give you that information so it must be provided to you. That doesn’t mean someone must tell it to you. You could gather the information from books, magazines, or Google it. This bit of information is likely different depending on where you live as people have agreed to different conventions. Arbitrary information, because it is a convention, may change. A short study of the history of the English language is a fine example.

This is very important in the world of Gattegno as Gattegno believed that only awareness can be educated. We cannot rely on the memory, it fails us. Arbitrary information must be memorized if it is to be retained. Necessary information is retained because a student understands the nature of things. In other words, the student understands how the thing works. This information does not rely on memory because it is rooted in awareness. Once you are aware of something, barring a brain injury, that awareness remains with you forever.

Arbitrary and Necessary and The Real Reason For Session One

The afternoon session blew to the top of my head off. I wouldn’t have appreciated it without going through the morning session. I have talked about my previous experience homeschooling. I am a recovering “information-shover-inner”. It is so easy to slip back into that role. Until the afternoon session, I didn’t have a good way to determine which information should be shared. I found myself telling my students things rather than letting the learn.

My group was pretty good in that we knew the student should explore the material and that we should ask questions that help the child become more aware. But beyond that, we got pretty fuzzy about what our group was attempting to accomplish. We worked on a problem like this: 243 – 178, I just showed my group a small trick that makes solving that super simple. I had jumped back into information shoving mode without thinking.

What we could have done in that morning session:

A possible, incomplete, example 0f the arbitrary and necessary information for task C is as follows: 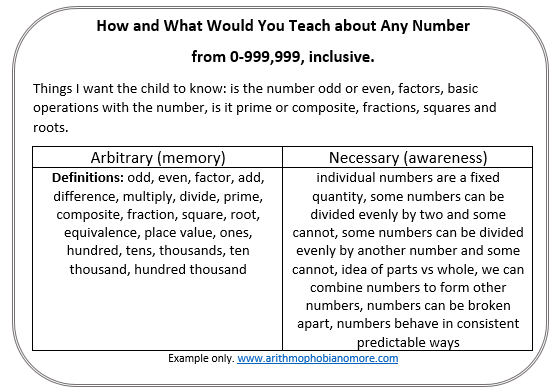 The benefits of understanding the difference between arbitrary and necessary are numerous.

I’ve mentally converted to Gattegno’s philosophy of education called, “The Subordination of Teaching to Learning.” I now know the information that needs to be provided and that which I should never provide. Goutard says that we should work on the understanding first, then provide the algorithm. In other words, we work on the necessary information and only when the student has a strong grasp of the necessary do we provide the arbitrary. That makes my job easier.

I also have a clear picture of what went wrong with my oldest son. We treated all information as arbitrary information. The information was handed to him, he memorized. Because his awareness was never educated, his memory only retrieved facts, it did not allow him to use the information in new situations. He was only capable of reproducing the situations which he’d already encountered. If he were presented with particular kinds of problems, he could plug the numbers into an algorithm and get a correct answer. He could not take the things he had memorized and use other in other situations. This really is a warning to me not to treat arbitrary information as though it is necessary, which is exactly what I did and something most math textbooks do.

Making the distinction between arbitrary and necessary places the responsibility for the student’s education on the student. I cannot educate my child’s awareness. The child must perform this for himself. There are things I can do that will help or hinder the process. But the task belongs to him and him alone. I could inform my child of all the necessary information. That puts a heavy burden on the memory as all learning becomes an exercise in memorization; therefore, he who has the best memory wins. But then we are back where we were with my oldest child and that didn’t work out so well for anyone.

Dave Hewitt spoke of the teacher’s role this way, “teachers can help students educate their awareness through helping them see the consequences of their actions/decisions, directing their attention to certain aspects of what they have revealed, or forcing awareness through a carefully constructed sequence of questioning which builds on this awareness.” Charlotte Mason speaks of something similar and refers to it as “the habit of attention”. I don’t think Gattegno and Mason are talking about the same thing exactly, but that the ideas are close cousins. But I will get into this more in a later post.

This is barely an introduction to arbitrary and necessary. This one blog post is really the beginning of my own exploration of the idea and it’s consequences applied not just to math but all areas of education and life. Dave Hewitt wrote a series of articles in the journal For The Learning of Mathematics. You can find them here.

If you are still with us after my little hiatus that included life and death, taking a newborn into our home, and attending conferences - - you know, that stuff we call life - -  we are plugging along in Chapter 3 of Gattegno Mathematics Textbook 1. You can find the rest of the posts in the sidebar under the category by the same name. This post covers ...